Among my favourite TV shows growing up were the household staple of comedies: Get Smart (1965-70), I Dream of Jeannie (1965-70), Hogan’s Heroes (1965-71) – and Gilligan’s Island (1964-67). So with a great sense of excitement, I ventured into Chapel off Chapel to see my childhood memories revived in Gilligan’s Island: The Musical.

I felt wary about seeing actors other than the originals filling the pivotal seven roles. And, of course, I wondered whether the passage of time had rendered the smart one-liners lame and tired. 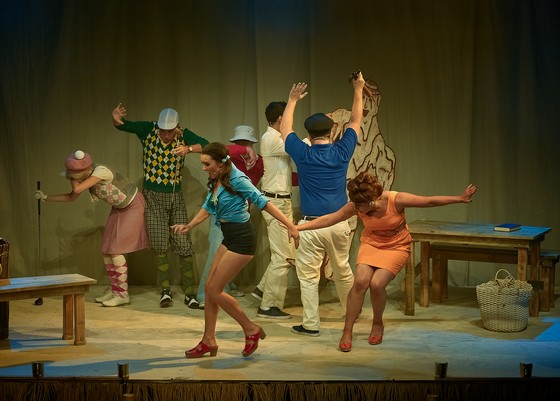 When I entered the theatre, the cast members were running around like mad chooks interacting with the audience and each other, and really hamming things up. Of course that was all part of the shtick. When they sang the popular title track from the series in grand fashion, I felt decidedly more comfortable.

Mind you it still took me the best part of 15 minutes to settle into the production because I was acutely aware of the deliberate exaggeration involved in some of the roles. Fortunately after that I really enjoyed what I was witnessing. I had fun with the silliness and mayhem on stage.

For those not in the know, the plot concerns seven people who set out on a three-hour charter in a tiny ship, the SS Minnow. They run ashore on an uncharted desert island following a torrential storm.

Some of the musical numbers written especially for this show are terrific – clever and melodic and well executed.

Two voices in the cast particularly took my fancy – Riley Nottingham (The Full Monty) as Gilligan and Molly Fisher (Titanic, The Musical) as Mary Ann. Sam Marzden (Chicago) can turn it on as the Skipper; and Kaya Byrne (The Wind in the Willows), as the Professor, also has a memorable number in the second act.

Alexia Brinsley (High Fidelity) as Ginger took longer to win me over. I initially felt the pout and excess were too severe, but then the real humour in the role started to take over. By midway through the first act I thought she, too, was onto a good thing.

Writers Hope and Laurence Juber (a guitarist for Paul McCartney and Wings) pulled together content from the three years of the sitcom to craft a suitable storyline with a natural thread. Gilligan’s Island: The Musical was first staged in the US in 1992. This Australian version features a modernised score.

The Howells (Joshua Monaghan and Lauren Jimmieson) remain filthy rich and abhorrent at the prospect of manual labour. The Professor’s expertise in all things seemingly knows no bounds; while simpleton Gilligan continues to have a love-hate relationship with the Skipper. Ginger takes every opportunity to sprout lines of dialogue from screenplays in her breathless style, and Mary Ann has a charming way about her.

An eighth member of the cast, a mysterious visitor, makes an appearance. But I am not a party-pooper so I will leave that as a surprise. 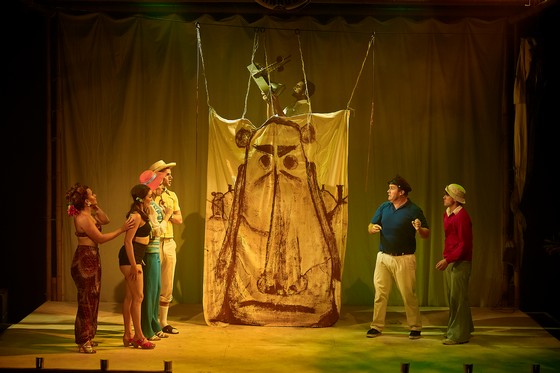 Fans of the TV show will get the most out of Gilligan’s Island: The Musical. Others may feel like they’re not in on the joke or won’t really understand what all the fuss was about.

I walked away with a smile on my face, having largely enjoyed the slapstick comedy after a bit of a rocky start. Gilligan’s Island: The Musical is playing at Chapel off Chapel until 4 March 2018.