The word gritty doesn’t do justice to Galveston. This hard-boiled, downbeat crime drama features a host of questionable characters and some bravura acting. 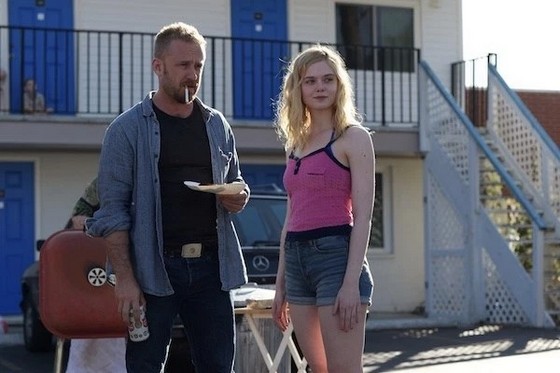 Ben Foster never fails to impress and is perfectly cast as a 40-year-old debt collector with a major health issue. Elle Fanning adds to an already impressive resume as prostitute Rocky, who’s seen far too much in her 19 years.

Roy (Foster) works for a dangerous loan shark, Stan (Beau Bridges), who gets others to do his dirty work. Roy’s latest “assignment” is a set-up from which he barely escapes. Unexpectedly he has the traumatised Rocky in tow. Next thing you know, they’re high-tailing it as far from the scene as they can get. But Stan has eyes everywhere and inevitably his henchmen will catch up with Roy again. In the meantime, Rocky has some business of her own; something Roy doesn’t realise until it happens. That involves rescuing her three-year-old sister and getting her out of harm’s way. Now both Rocky and Roy are on the lam and only more bad things can occur.

Galveston is a film that requires concentration. I found the understated drawls difficult to understand, and pivotal moments are delivered in a matter of a few seconds. That’s not a criticism, just an observation. I liked the picture very much because it presents as realistic with a menacing undertone.

This film is the work of French actress and filmmaker Melanie Laurent. Nic Pizzolatto, adapted his own book for the screenplay, but under another name – Jim Hammett. Galveston is a character-driven road film – a distinctively American genre. But Laurent brings European sensibilities and it benefits greatly.

Roy and Rocky are a couple of lost souls who should never have found one another, but did and the course of their lives is affected as a result. But don’t think Galveston disintegrates into a mushy love story … hardly. It remains dark and brooding. Arnaud Potier’s cinematography reflects that. Still, I walked away satisfied, despite the fact there are no easy answers – and were never going to be. The journey is well worth taking.Laurent shows she’s quite the talent behind the camera; just as she is in front of it.