Future Man could be considered an updated and filthier version of the 80’s ‘nerd’ movies that were ploughed through back in the day when a trip to the local video shop would set you up for the entire weekend.  Yes, Generation X, you will see here nods to loads of your childhood video games and movies and extra points if you recall which 1984 movie followed a similar plotline (which in fairness the main character of Future Man references early on). 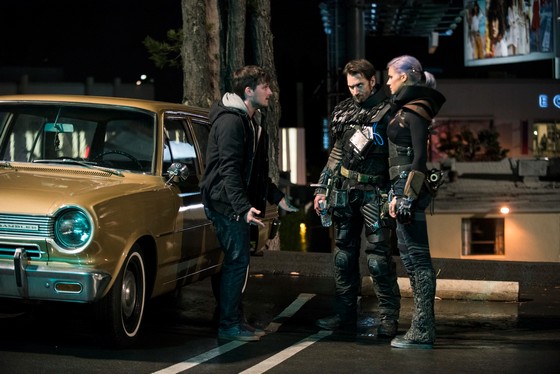 Living anything but his best life, Josh Futterman (Josh Hutcherson) is yet to flee the family nest and make his ageing parents proud.  By day, Josh is a mild-mannered janitor and by night, an armchair soldier of the present kind.  With the kind of bedroom gaming set up that most teenage boys dream of – only sadly the teenage years have long been in the tail lights for Josh – our hero is heavily invested in one particular offering that other gamers have long since abandoned, deeming the science fiction fighting game impossible to win.  Nothing if not determined when it comes to his gaming efforts, Josh persists and one day makes it through to the end of Biotic Wars.

Caught halfway through a celebratory act of, shall we say, self-love, Josh can barely believe his eyes when two soldiers from his favourite game suddenly appear in the front of him, suited up and ready to terrify with the righteous intensity of true believers.  The super focused resistance leader Tiger (Eliza Coupe) had in fact just been in Josh’s affectionate thoughts.  Tiger and her second in command Wolf (Derek Wilson) have an urgent request for the befuddled gamer.

Convinced that Josh is the one who can save their future world, Tiger and Wolf are honed resistance fighters from a future where rats are sadly always a menu necessity, no more babies are being born and urban survival means staying one step ahead of the evils of advanced technology. The two explain to Josh that the game Biotic Wars is an assessment tool sent from the future, used to discover new recruits for the ultimate cause – saving planet Earth from itself.

Tiger and Wolf are less than impressed Josh’s fighting prowess now they’ve seen it in person, but it does seem that the hapless gamer may have some useful knowledge about how to stop the future from becoming such a dumpster fire of death and destruction.  The real life abilities of the medical research centre janitor may not fire up anyone’s phasers but the conversations Josh was privy to whilst pushing a mop around prove to be key to stopping the future before it happens.

Trashy TV might be what you need right now, and Future Man definitely is that.  Snappy dialogue and some serious investment in the set up of situational comedy saves Future Man from being unwatchable, so heavy is it on the puerile jokes and slapstick that is somewhat deadened by all the casual violence.

The casting however is spot on, with each actor making some decent sandwiches out of the ham they have been dealt.  It is impossible not to laugh at how Josh manages to make the best of his meagre talents to forge ahead in his attempt to shine for his purple haired lady crush, the driven Tiger.

The kind of ‘bro’ and ‘dude’ humour that is in every single conversation in Future Man you would think had well and truly had its moment but perhaps not, as Future Man has now survived two season renewals.  The 2017 pilot of Future Man was produced by Seth Rogan and Evan Goldberg, screenwriters to the movies Pineapple Express and Superbad and created by their Sausage Party co-writers Ariel Shaffir and Kyle Hunter. That might give you some forewarning as to what you will encounter as you dive into the dystopian soup that is Future Man.

Future Man is essentially a time-travel show, presenting all the paradoxes of the genre that we’d expect to encounter in a science fiction send up, with the future folk being completely terrifying and jealous of the riches of those dwelling obliviously in the present.

Season 1 of Future Man is now streaming on SBS on Demand. For those who are a little further along, all three seasons can be viewed now via FOXTEL on Demand.