In Free Solo, American Alex Honnold attempts to climb a 3,200 foot sheer rock face without any safety gear – no ropes, no harnesses, no protective equipment. It’s never been achieved before at Yosemite’s El Capitan Wall. One wrong move and there is every chance that this free solo climber will plunge to his death. 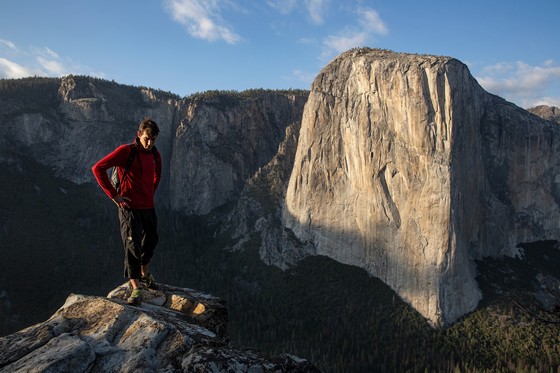 As this documentary unfolds, we learn how Honnold has lived out of his van for the best part of a decade and scaled mountains around the world. We’re given a little insight into his upbringing. Honnold keeps detailed daily notes on his feats. He’s methodical about it; literally plotting his next move. Before this documentary was made, he’d never suffered a serious injury as a result of his climbing.

In more recent times Honnold – who admits he’d choose a mountain ahead of a partner – gains a steady girlfriend, Sanni McCandless. She’s caring and beautiful. McCandless readily shows her emotions, while Honnold is much more deadpan. He’s comfortable in his own company (he could well be on the autism spectrum). As a result, some of what he says is decidedly humorous. While she supports him in pursuing his passion, she’s understandably concerned about his long-term welfare. Death is the elephant in the room. At one stage, we see how many other lauded adventurers have succumbed … how many have been killed in pursuing their dreams.

Even the cinematographers, who are professional climbers themselves, struggle with documenting – and thereby promoting – something that could result in their friend’s demise. Still, the picture painted is that for the time being at least, this level-headed young man is top dog among a close-knit community of climbers.

Director Elizabeth Chai Vasarhelyi acknowledged that every day presented ethical questions where they weighed up risk against the rewards presented by filmmaking. As you can imagine, the cinematography – led by fellow director Jimmy Chin – is breathtaking, especially some of the aerial shots and those that literally surround and appear to envelope Honnold. Mind you, I dare say this isn’t a doco that will appeal to those who suffer from vertigo.

The shoot involved four camera operators – including Chin – on the wall itself, a couple of remote-triggered cameras above the climb, a long-lens camera on the ground and one at the top. Just how Honnold manages to move with such speed and precision remains gob smacking when so much of the time he has the barest of foot holds. At times, he is called upon to do the splits hundreds, if not thousands, of feet off the ground as he manoeuvres across heavy rock.

Free Solo is engaging and insightful – a movie to see on the biggest screen possible.