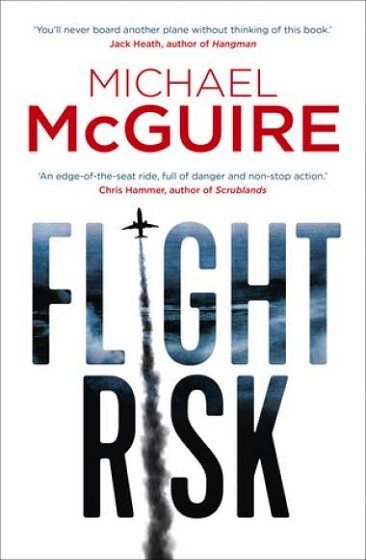 Post 9-11 it’s hard to think that there hasn’t been speculation about the next shock and awe campaign. I bet nobody thought there’d be an Australian, rough and tumble ex-commercial pilot, come spy at the centre of it all. The theory that Michael McGuire proposes in his thriller Flight Risk is, however, just believable enough to make you feel decidedly twitchy about the possible reality. Right from page one Flight Risk is out of the starter’s gate at a hefty clip, moving quickly through the back story of Ted Anderson: disgraced former pilot, widower and estranged father, former a lot of things really; currently an agent of a top-secret Australian government agency, tasked with investigating terror-related incidents, straight into the thick of things when passenger planes start going missing mid flight.

There’s heaps of action in Flight Risk, which is odd as there’s also a fair bit of time spent sitting in aircraft. Granted one of the planes spends some of that time being forced out of the air by the Indonesian air force, and to be fair, it’s a chance sighting and a gut reaction that sees Anderson switch from an ignominious return flight to Sydney to a high risk flight to Ukraine, only to find himself landing his passenger flight somewhere in Western Africa, right into the middle of preparations for an attack that will make the world really sit up and take notice.

What definitely helps make all this high-risk, high-octane action work is the central character of Ted Anderson. A cynical maverick with a dust-dry sense of humour and deeply entrenched guilt over his personal life screw-ups, he’s impulsive, instinctual, tough and wonderfully engaging. All the way through – from the moments of regret over his estrangement from his daughter and his drinking that meant his wife was out looking for him on the night she was killed; and his occasional bafflement that his boss selected him to work in counter-terrorism despite his myriad screw ups in the past – he’s an all out action hero in a (much-loved) leather jacket who is vulnerable and prone to a massive headache if belted around the ears often enough. In short, Australian, real, believable. Whilst the plot itself is over the top thriller stuff, and there’s a cliff hanger ending that will either intrigue (as it did for this reader) or make others chew the book covers off, there was much to really like in Flight Risk.

Of course you’re going to have suspended your disbelief a while before a lone spy happens to observe a cleaner in an airport behaving oddly. You’re going to be working on the principle that somewhere up in the sky there are flying command centres with more computer hardware than your average data centre (not so hard to believe really), and that a couple of agents can basically launch into a joint investigation without so much as a “hang on I might have to get clearance on all of this”. But then you’ll also be called upon to to believe that wiggle room happens if you’re the only person in a cabin that manages to grab an oxygen mask, the spy on the spot that happens to be able to fly a plane, and when you’re duct taped to a seat, but so what…

Flight Risk is pure adrenaline-pumping thriller territory and you’re going to be turning pages, sometimes laughing, sometimes cringing, questioning whether you really do need to fly anywhere ever again, and frequently wondering just how much of this could be a real plot.