Finding your place in the world is hard enough for most. But when dealing with teen angst and sexuality, it can be harder still. Writer/director Kerem Sanga (The Young Kieslowski) explores these fraught issues in First Girl I Loved. 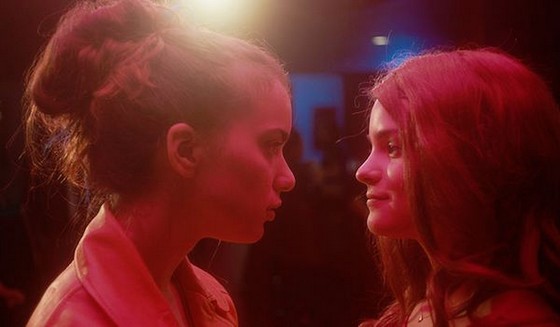 Anne Smith (Dylan Gelula – TV’s Casual) is a bright high school senior. She’s best friends with a guy who has designs on her, Clifton Martinez (Mateo Arias – Kickin It).  She rejects his advances because she has a crush on the beautiful star of the softball team, Sasha Basañez (Brianna Hildebrand). Anne makes her move, using the excuse of doing a profile piece on Sasha for the school newsletter. Both are fumbling around, but know they want to spend more time with each another. However, coming out as openly gay at high school will inevitably bring unwanted attention. Clifton doesn’t take kindly to the news; and before long Sasha has a change of heart.

Sanga has crafted a fascinating drama, which defies nice Hollywood conventions. Sanga’s day job is teaching standardised texts. He’s spent a lot of time around high schools and universities, listening to the way young people talk. On top of that, his sister had come out to him as gay.

”So these things … are rattling around in my head and then you make up a story. That part is trial and error. I always try to focus on point-of-view, go through the whole story from every person’s view and see if what that person is doing makes sense, emotionally. That was my approach … from writing to shooting to editing.”

Importantly, Sanga presents the perspectives of each of the three central characters. I defy you to pick where this is heading. The whole thing felt real to me – the giggling girls, the jealousy, the fear of being caught, the concerns about body image and confidence.

One thing all the main characters appeared to have in common was an inability to speak meaningfully to their loves ones. It’s like the generation gap has a hold of them. They refuse to risk it; even though their loved ones would, most likely, provide a reasoned perspective.

I was particularly taken by Pamela Adlon’s (TV’s Californication) take on Anne’s mother. Gelula is totally believable as this confused kid who faces an uncertain future.

The First Girl I Loved is a gay-themed film that has crossover appeal. As such, I draw a parallel between it and the recent Irish movie Handsome Devil. The film leaves you thinking about the best way to navigate burgeoning sexuality – without putting the rest of your life at risk . Rated M, it scores a 7½ out of 10.