Following its premiere as the closing night attraction at the 2017 British Film Festival, the formulaic rom-com Finding Your Feet gets a theatrical release. With its story of elderly Brits enjoying life and facing mortality, this endearing but flawed film will appeal to the same demographic that embraced films like The Best Exotic Marigold Hotel. Finding Your Feet is the type of affable romantic comedy the British do so well when they get it right. While it’s enjoyable enough, it’s an imperfect film and a little cliched. 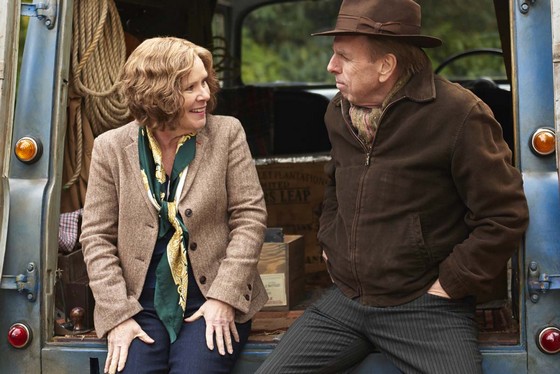 Lady Sandra Abbott (Imelda Staunton) is a snobby socialite. She’s been married to Mike (John Sessions) for forty years. She’s relished her standing in society. But then on the eve of his retirement, she discovers that he’s been having a torrid affair with her best friend. Sandra leaves him, and having nowhere else to go, arrives on the doorstep of Bif (Celia Imrie), her estranged older sister whom she hasn’t seen for ten years.

Bif is something of a bohemian. A free-spirited activist, Bif lives in a poky flat in a rundown council estate. Every Thursday Bif attends dance classes in the local community hall. Sandra reluctantly joins her. Bif introduces Sandra to her colourful circle of friends, including Jacky (Joanna Lumley) and Charlie (Timothy Spall). At first Sandra struggles to adjust to Bif’s impoverished lifestyle. She also disapproves of Charlie, whom she thinks is a crude oaf. But over time she grows fond of him, and it’s not hard to see where the film is headed.

As the title suggests, soon Sandra reconnects with her sister and also rediscovers the joy of life through dancing and her blossoming romance with Charlie. Charlie however has a secret – he’s still married, although his wife is suffering from dementia and is confined to a nursing home. Charlie sold the family home in order to provide for her care and now lives on a dilapidated houseboat on the Thames. He harbours dreams of one day sailing away to France.

There are nice performances from the veteran cast of stalwarts of the Briitish film and theatre scene. The three leads share a great rapport that enhances the trite material. Staunton (Vera Drake) gives a nice performance that runs a gamut of emotions as she goes from bitter, judgmental, and vulnerable to light and happy and embracing life. Staunton and Imrie develop a nice dynamic as the sisters re-establishing their once close relationship. Spall brings charm and warmth to his performance as well as a nice streak of sardonic humour.

Finding Your Feet is basically another variation on the fish-out-of-water scenario.It explores universal themes of family, mortality and romance. First time writer Meg Leonard, a former casting assistant, and Nick Moorcroft (St Trinians) provide the script; and it packs in a lot of incidents. There are a few laugh-out-loud moments along the way, and a few tears. Thankfully though Leonard and Moorcroft eschew the mawkish sentimentality that Hollywood filmmakers usually bring to this sort of stuff. However, the ending itself is a cliché, but many will find it emotionally satisfying.

Director Richard Loncraine (Richard III) is a dab hand at this kind of thing and he keeps things moving along. The film looks good thanks to some nice cinematography from John Pardue, who’s done lots of television work.