Marriage is hard work. How often have you heard that? Well, the subject is given a working-over in American playwright Michael Weller’s drama Fifty Words. 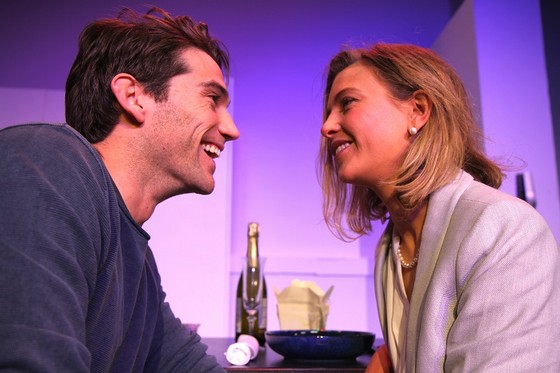 Adam (Daniel Schepisi) is an architect who works a long way from home. Jan (Katharine Innes) is a former dancer turned businesswoman. They have a love/hate relationship. Their child (who we don’t see) is having his first sleep-over. So they have their apartment to themselves; and Greg is up for some horizontal action. He reminisces about their risqué first date. But there’s trouble in paradise. When Jan keeps Adam waiting for a couple of hours, the knives are out. Some home truths are told, but that’s just the start of it.

His business is in trouble; she’s a workaholic. He doesn’t have the strength she’s looking for; she’s unrelenting … and so on. They push each other’s buttons. Then, an incendiary revelation threatens to blow their marriage to smithereens.

Lab Theatre’s Fifty Words suffers for a number of reasons. But first the positives. Innes is very good, inhabiting the strengths and weaknesses of her character and taking on a highly plausible American accent. She draws breath before she enunciates and has a keen understanding of what it takes to flesh out Jan’s persona.

Not so, Schepisi, who was, at times, barely audible (he didn’t project) during the first act on opening night. The speed of his patter was another problem. I’m afraid his representation of Adam didn’t ring true. It felt like he was acting rather than inhabiting his character. Then, on occasions, he pushed too hard in the second act. So, he went from one extreme to the other. I was reminded of AFL coach John Kennedy’s remarks during the 1975 Grand Final when he implored his players not to think, not to hope, but rather to do something. Theatre is all about belief on the part of the audience and I didn’t believe he was who he was meant to be. 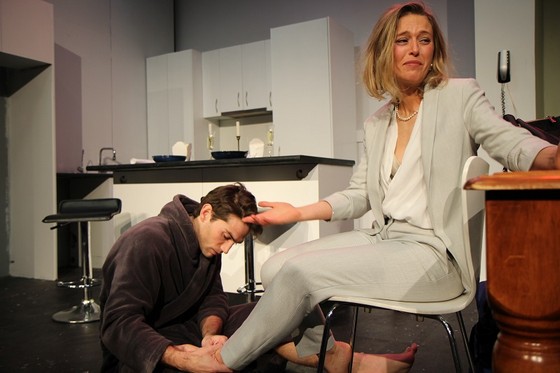 In spite of the heat in the kitchen, Fifty Words gets off to a slow start. It appears to labour, before hitting stride after Adam is left frustrated. The second act is quite schizophrenic as the protagonists lurch one way and then the other. I don’t doubt that the characters would feel anger and regret, but Weller has obviously condensed a longer time frame into a workable narrative. That being the case, director Peter Kalos needs bridges between scenes, but they just aren’t there.

I have no doubt Weller’s full-length play has more to give than what we saw on stage at the Alex Theatre, where this production is on until 3 August 2019. So, yes, marriage is a difficult journey, but for all of the barbs and petulance we see, I also have difficulty with Lab Theatre’s representation of Fifty Words.