Is bullfighting a subject appropriate for children? I don’t think so. It’s an ancient and barbaric practice. Just why the producers of Ferdinand believed it was appropriate to turn this into a cutesy animated feature is puzzling, to say the least. I say that notwithstanding that the central character is a gentle giant. At one point he literally becomes a bull in a china shop. The movie is based on a children’s book, The Story of Ferdinand by Munro Leaf, 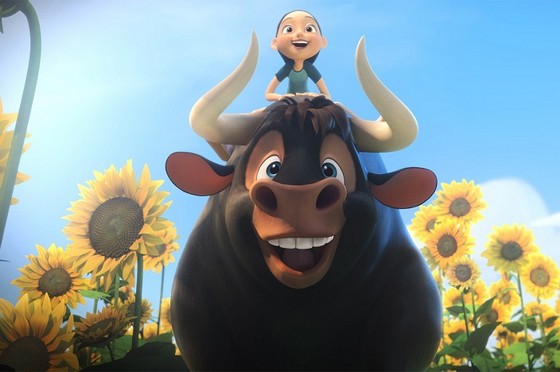 Ferdinand (voiced by John Cena) is a Spanish fighting bull who prefers smelling the roses to chasing pieces of red fabric in a ring. That isn’t the case with his brethren, led by the fractious Valiente (Bobby Cannavale) and including Angus (David Tennant), Bones (Anthony Anderson), Guapo (Peyton Manning) and Maquina (Tim Nordquist). It seems that Ferdinand has escaped the fate of most of his kind when he breaks out of captivity and finds refuge with the kind-hearted daughter of a flower seller.

But his past comes back to haunt him. It appears his destiny is sealed, even though he’s able to befriend almost everyone he meets, including scavenger hedgehogs Una, Dos and Cuatro.

There are, indeed, some neat one-liners and sight gags in Ferdinand. The animation is attractive too. Several scenes tickle the funny bone, including one involving arrogant show ponies facing off against the bulls in a dance-off.

The characters resonate, although there are few surprises. You get what you would expect, including an irritating persona, in this case an old goat named Lupe (Kate McKinnon). Ferdinand is not only a fine specimen of “manliness”, but an all-round nice guy, principled and kind.

Still, the film felt tortuously long. This should have been 90 minutes at best. There wasn’t enough to sustain it beyond that length.

So, Ferdinand is entertaining in patches. But it’s largely predictable fare that I was “over” before the movie ended.