Action, corny humour and a thin script mark Hobbs & Shaw; the 9th feature from The Fast & Furious franchise. This one is a spin-off though, not a sequel. At stake is … surprise, surprise … just the future of the world due to a virus the likes of which we haven’t seen before. 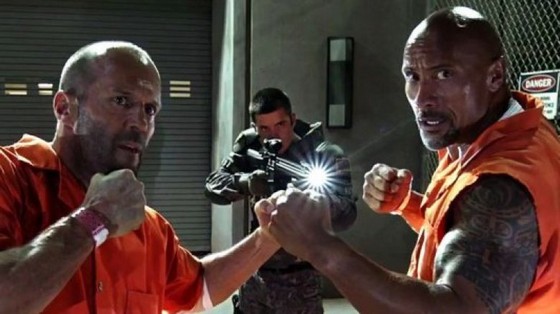 Hobbs (Dwayne Johnson) and Shaw (Jason Statham) haven’t seen eye to eye, since the US Diplomatic Security Service agent and former British military operative first faced off in Fast & Furious 7 (2015). They’ve trash talked and have tried to take each other down. Now they’re forced to cooperate – reluctantly – as they try to bring down a cyber-genetically enhanced villain, Brixton (Idris Elba). He’s looking to gain control of an insidious bio-threat that could alter humanity forever. Rogue MI6 agent – and Shaw’s sister – Hattie (Vanessa Kirby) injected the virus into herself to keep it out of Brixton’s hands; but now she’s the target.

The story takes place in locales from LA to London, Chernobyl to Samoa.

David Leitch (Deadpool 2) directs from a story by long time Fast & Furious writer Chris Morgan and Drew Pearce (Iron Man 3). This is a movie about one-upmanship, bad asses and family ties. Much of it is obvious, but still we go through the motions of fight after fight. The confrontations are epic, if at times repetitive. But Leitch delivers some spectacular scenes. Car chases, new age weaponry, hand-to-hand combat … it’s all there … even lassoing a helicopter.

Johnson melts hearts and kicks butt (doesn’t he always) as Hobbs. He remains a charmer with a physique to die for. Importantly, he never takes himself too seriously. Statham also has on-screen presence but is overshadowed by Johnson. Kirby is in several vital scenes and holds her own when it comes to dishing out punishment. Elba has no trouble standing toe to toe with Johnson and Statham. Helen Mirren has a lot of fun with her cameo as Shaw and Hattie’s mum, Queenie – a jailbird no less.

Fast & Furious: Hobbs & Shaw is a movie for adrenaline junkies who don’t want to think too much. The filmmakers even encourage you to stay until the final frame by having two separate scenes during the credits.