The popular TV series Fantasy Island ran for seven seasons from 1977. It involved guests being granted fantasies, but at a price that often involved exposing the error of their ways. So there were perils and life lessons, but nothing like this big screen horror version of the show. 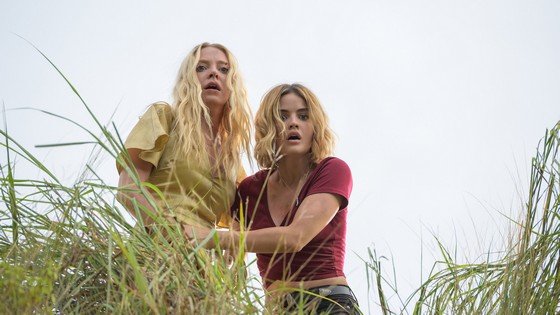 Each of the five guests who fly to a luxurious and remote tropical island resort has apparently been selected after they won a competition. Naturally, no-one knows just what to expect. A couple of so-called brothers are party animals; joined by a wannabe soldier, a girl picked on at school who wants to get back at the student who bullied her; and a beautiful woman who turned down a marriage proposal. They all think they’re destined to live out their fantasies because the island has magical powers. Instead, the experience quickly turns nasty and evil. Their host Mr Roarke (Michael Peña) has a reason for being on the atoll and for doing what he is doing.

Unfortunately, what may have seemed like a good idea on paper turns into anything but on screen. The material isn’t handled well by director Jeff Wadlow (Truth or Dare). Fantasy Island circa 2020 feels clunky. The script is too convoluted for its own good. The constant twists are wearing … and confusing.

A number of the key performances are particularly weak. Maggie Q is arguably the best of them as Elena. Further, I didn’t understand where several of the secondary players even came from, let alone why they were there.

Before I saw it, I was quite looking forward to revisiting the TV show, but my mood soon darkened. Unfortunately, Fantasy Island is not the stuff cinematic dreams are made of.