Aardman has a rich history of creating fine animated features in movies like Chicken Run and Shaun the Sheep. Although Early Man – the largest Aardman production mounted in its 40-plus year history – isn’t up there with the best of them, it still has its moments. 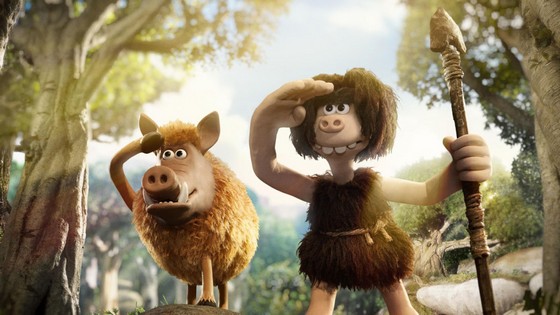 Set in prehistoric times, the film follows the story of courageous caveman hero Dug (the voice of Eddie Redmayne). He lives in a thriving valley together with his best friend and sidekick Hognob (Nick Park) and a tribe of fellow eccentrics, headed by Chief Bobnar (Timothy Spall). The ambitious Dug aspires to hunt mammoths and go on adventures; but Bobnar is quite happy with leading a quiet life chasing rabbits. However, their serenity is suddenly shattered when their valley is invaded by an enemy, the likes of which they’ve never seen.

The instigator is pompous Lord Nooth (Tom Hiddleston), governor of a Bronze Age town. A money-loving tyrant, Lord Nooth has found bronze in the tribe’s beloved valley. So he invades with a troop complete with armoured mammoths, forcing the cavemen to flee and take shelter in the inhospitable Badlands. In the drama of the invasion, Dug is accidentally captured. He ends up in the intimidating world of the town, where he meets Goona (Maisie Williams), a spirited young girl who sells bronze pans. Swept up by the Bronze Age townspeople, Dug eventually finds himself in a huge stadium filled with a boisterous crowd, seemingly there to attend a cult spectacle. But he soon discovers it’s, in fact, a game of soccer.

Spotting an opportunity to win back his home, Dug challenges Real Bronzio –the imposing local team full of stars – to an almighty football match as the ultimate clash of civilisations. He travels back to the Badlands, eager to share the news. The tribe have a chance to return home to the valley if they win the match. The only problems? If they lose, they face a life sentence working in the mines and … they’ve never played soccer before.

My biggest qualm concerns the total predictability of the yarn. Sure, the idea of the Stone Age versus the Bronze Age was novel. But the whole thing revolved around a soccer game between the underdogs and the unbeatables –  so guess how that’s going to end.

Just like Disney animation, there inevitably has to be an animal sidekick. Here that’s the hog – and, as usual, he’s a bit of fun. Although there were humorous interchanges, Early Man didn’t provide anywhere near the number of laughs I was looking for. It didn’t have that adventurous bent that I was seeking either.

Aardman isn’t known for calling it by the numbers, but I’m afraid they have very much fallen into that trap with this one, providing only limited amusement.