Being your typical crime fiction reader, I do like to have at least a few books behind me before I watch the TV or movie adaptation of one of ‘my’ series.  Dublin Murders is based on the first two books in the Dublin Murder Squad’ series by Irish author Tana French, these being ‘The Woods’ and ‘The Likeness’. 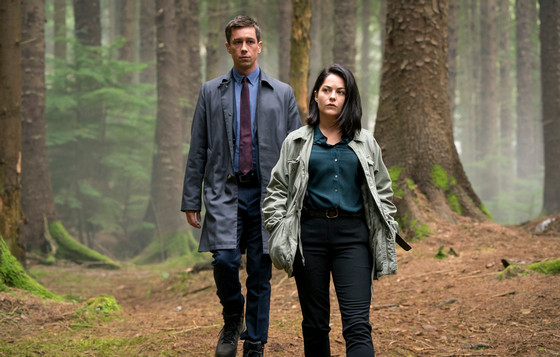 Detective Rob Reilly (Killian Scott) is known as the English cop on the team.  Only his partner Cassie Maddox (Sarah Greene) is aware that Rob is in fact a local, sent abroad as a child to escape the legacy of being the only living witness to a possible double child abduction. A change of name and an English accent has kept his identity separate from those that remember the 1985 disappearance of Knocknaree children in 1985, but it is knowledge that Robert, formerly Adam, is certain will come out one day.

When the call comes out instructing Rob and Cassie to attend the discovery of a body in the very same woods, both detectives are reluctant to get too involved.  The victim being that of a child, a thirteen year old girl who had been missing for two days, means that the case will and should receive the closest of police attention.  Cassie would prefer it wasn’t from Rob and herself, but it soon overruled by Rob whose blocked memories of the wood incident and its frightening aftermath are starting to trickle back into the present.

Adam was hounded as a child by those who couldn’t understand why he could not remember what had happened to the town’s missing children.  Even Adam’s other young school friends didn’t believe him and bullied him mercilessly. Though twenty one years has passed between the original woods disappearances and this current case, the Dublin murder squad is still keen for their two detectives to find a link between the past and the present.

The ethical dilemmas of cops investigating possible links to past crimes in which they were themselves involved is balanced by the subplot of Cassie having had involvement with deep undercover work herself in her policing career.  As close as they are, Cassie and Rob can only protect and cover each other to a point.

The cringey part of this series is time spent waiting for both cops to receive a royal bollocking for not disclosing Rob’s past connection to the town and its missing children.  The viewer is just waiting for that particular axe to fall and to see if the two detectives will be forced to go rogue and investigate in their own time, or if they are disciplined by their (embarrassingly depicted) dinosaur of a sergeant.

Bestselling crime fiction series have a long history of being snapped up for the small screen as the groundwork of setting and solid characterization has already been crafted over the course of subsequent book releases.  Tana French’s books were grim and atmospheric thrillers, and so is their TV adaptation in Dublin Murders.

The nuances and complexities of the close relationship that the two detectives share gives an unspoken subtext to their interactions. We know there are more secrets to be revealed, and this will be spooled out to explain the mysterious initial scene of episode one where Cassie turns her back on Rob and walks away.

The urban landscape and dated interiors depict the grim realities of life for those living in this impoverished community that barely survived the first round of disappearances and are shattered by what appears to be a new killer stomping through their woods. Filmed on location in Dublin and Belfast, the outdoor woodland scenes are what anchor the crimes to the area, as it doesn’t appear as if the location has changed much from the day young Adam was found bleeding, dazed and alone.

Dublin Murders is absorbing and atmospheric viewing that promises to be just the ticket for anyone wanting to dive into a dark new police procedural series.

Dublin Murders is an eight part series dropping an episode a week now on SBS on Demand.