Writer Rebecca Meston was inspired by the true story of former NASA astronaut Lisa Nowak.  You might remember Nowak as the person who drove non-stop for 14 hours to confront her ex-lover’s new partner. Wearing a disguise, she also a knife, duct tape and lurid photos. She allegedly wore an adult nappy so she didn’t have to stop. 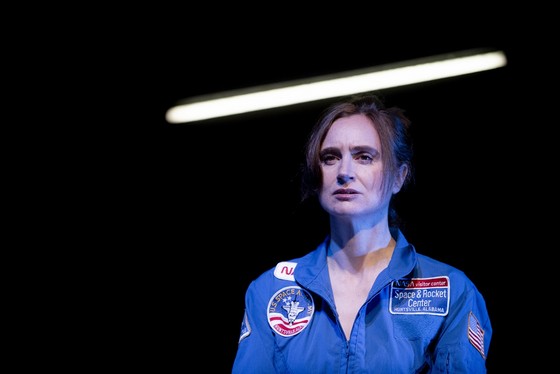 This world premiere work re-imagines Nowak’s story and her drive, mining the terrain of loss and disappointment. It counts down the hours till she reaches her destination.

When the key character, played by Lizzy Falkland – kitted out in a blue astronaut suit – is on a mission, nothing can derail her. It’s a situation where nothing else matters. No man or child will stand in her way. Hence, Meston includes an awkward scene where a photographer (played by Ashton Malcolm) wants to take a series of stills with the astronaut and her husband (Christopher Pitman) and she is cold as ice. No smiles. No small talk. Just reluctant posing. Whe her husband implores her to spend time with their child (who we don’t see) and she refuses because of her commitment to her job. Clearly, her priorities are mixed up, but this is a play about a jangled mind.

As I mentioned, this is not just one but two relationship breakdowns – one with her husband and the other with a fellow astronaut (again played by Christopher Pitman). Ashton Malcolm also fills the role of her husband’s partner.

In a strong performance, Falkland doesn’t disappoint as the astronaut. The character is all about intensity and focus. 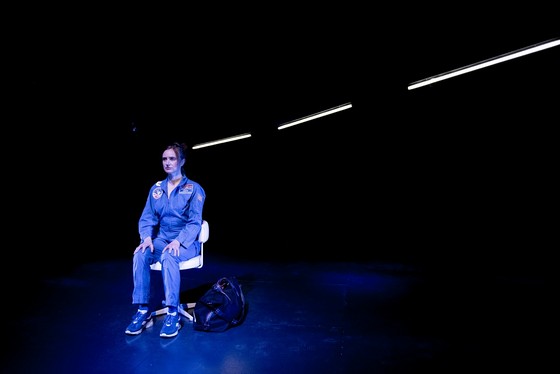 Directed by Sasha Zahra, with dramaturgy by Saffron Benner, Drive causes us to reflect on a dramatic fall from grace into insanity – or is it? Surely, all of us have a breaking point if the rubber band is stretched too tightly.