Swedish director Ruben Östlund’s film Force Majeure (2014) marked his arrival as a filmmaker of note. Americans Nat Faxon and Jim Rash wrote the screenplay for The Descendants (2011) and directed The Way Way Back (2013). But it seems the European sensitivities of Östlund’s film have been a little lost in translation in Faxon and Rash’s remake, Downhill. Perhaps it was the decision to re-interpret Östlund’s rather dark vision, but something’s not quite right about Downhill. 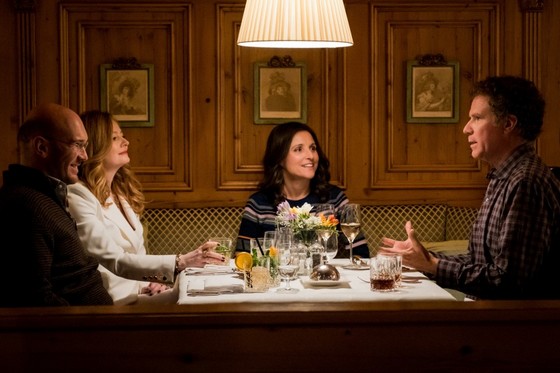 Although the film follows the same basic trajectory as Force Majeure, its attempt to shoehorn American-style comedy into a European relationship drama falls rather flat. The fact the film resorts to broad stereotypes for cheap laughs provides evidence of a certain desperation. The film’s star Julia Louis-Dreyfus served as a producer on the project (as did Östlund), but it seems her enthusiasm for the project hasn’t translated well on screen.

Billie (Louis-Dreyfus) and husband Pete (Will Ferrell) arrive in Austria with their tween-age sons Emerson (Ammon Jacob Ford) and Finn (Julian Grey) for a week of skiing. Seems Pete has organised the trip and booked the family into a “party” hotel (“the Ibiza of the Alps” as it’s described) rather than the nearby family resort. The hotel’s exuberant guest relations director Charlotte (Miranda Otto) makes an immediate – if somewhat uncomfortable – impression on them. Billie is a lawyer; while Pete appears to be in the tech business. He’s rather pre-occupied with his “work phone” and responding to texts from co-worker Zach (Zach Woods). But an incident at an otherwise routine lunch upends their world. A controlled avalanche up the mountain races toward the restaurant. Clearly unnerved, Billie and the boys huddle under the table. Pete however runs. Although it’s soon apparent everyone is okay and there was never any real danger, Billie feels understandably betrayed. The incident will push their already strained relationship to breaking point.

Downhill wants to be both a serious relationship drama and an offbeat comedy at the same time. While that combination might be possible to achieve, Faxon and Rash can’t quite stick the landing on this occasion. I seem to recall feeling similarly about The Way Way Back, which also featured a comic actor (Steve Carell) as a problematic father figure. For example, the film plays it straight in depicting the “ugly” stereotype of Americans abroad, but lapses into farce in the stereotype of the freewheeling European as embodied in Charlotte. While I’m all for complexity in filmmaking, in this case the styles clash too abrasively to be really credible.

Perhaps it all comes back to the script, co-written by Faxon and Rash with Jesse Armstrong (Succession). The writers seem to want to jam a whole lot of ideas into the film but its limited (86 mins) running time means many of them are simply dropped without explanation or exploration. For example, a key plot point involves Pete’s relationship with his own father; but that relationship is conveyed via one conversation. This I guess is another example of the comedy-drama tension – the filmmakers want to explore dramatic concepts, but the conventions of comedy don’t allow them that luxury.

For all that though, the performances are difficult to fault. Julia Louis-Dreyfus (Veep) is great as the somewhat humourless Billie. Will Ferrell (Holmes & Watson) is a neat counterpoint as the shallow but goofy Pete. Zach Woods (Silicon Valley) and Zoe Chao (The OA) provide solid support as a younger, more carefree couple. Australia’s own Miranda Otto (The Chaperone) however walks away with every scene she’s in as the free-wheeling Charlotte; even if her character is more like a caricature.

While it makes a few insightful points, Downhill is ultimately pretty bland fare. Unable to fully commit as either drama or comedy, it drifts along in an uneasy netherworld between the two.