Lindy Hume’s darkly delicious production of the Mozart masterpiece Don Giovanni has “hit” written all over it. From the stirring opening overture to the amazing finale, with fifty-odd mostly naked women pushing Don Giovanni to hell, it gripped, titillated, amused, and at times brought gasps of disbelief from a shell-shocked audience.

There was no watch checking or seat squirming for the first 90 minute act and the second 70 minutes flashed by. The singing, with cast and chorus, without exception was of the highest order in tone and emotion. It was a sheer aural pleasure with that and the marvellous score played by the QSO. The recipe was in the work but the mixing was perfected by the director and her cast. 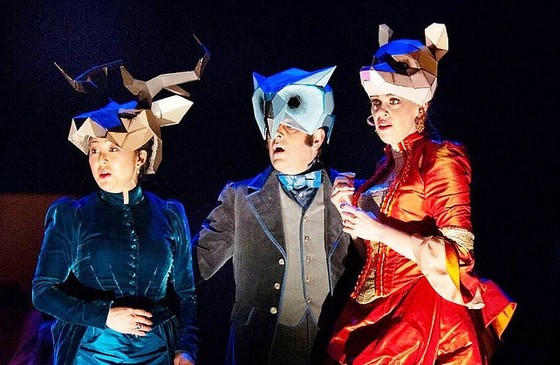 This 18th century libertarian and womaniser hit the nerve with modern times – and certainly a bevy a women on stage looked ready join the “me-to” movement as Don Giovanni’s words and actions are mirrored in today’s politics and the movie business.

And Don Giovanni had plenty of that; he was the aristocrat with a surmised divine right to seduce and even kill. Lindy Hume saw the man as a sociopath/psychopath and baritone Duncan’s Rock’s superb interpretation showed just that. He had no compassion, no remorse and smiled as he dished out his hurt. And yet, his pleasant manner and apparent sincerity made it easy to understand why the women fell for is charming lines.

Leporello, his hard done-by servant even eventually saw through his master’s mask of sweetness and good humour to find his true, inner evil. Shaun Brown played the clownish oaf beautifully. His was the role to bring in the lightness and show off Mozart’s brilliant sense of wicked humour. He and Rock formed a great comedy double act.

The set was s huge, dark, and featureless wall with a raked floor. Ben Hughes’ lighting plot was dark, with flashes of brightness, which worked perfectly with the humour and simmering anger of the combatants.

The opera opens with Don Giovanni’s attempted rape of Donna Anna, a girl about to be married and the cold-blooded murder of her father the Commendatore, sung by Andrew Collis. Anna was sung by soprano Eva Kong and not only did she have a pure and beautiful voice but acted her role well too. Her fiancé Don Ottavio, sung by Virgilo Marino, swears vengeance and that is the start of the crusade to assassinate the seducer.

Joining the posse are two more women who suffered at the hand and smooth tongue of Don Giovanni: the scorned and hopelessly in-love Donna Elvira, sung with a mix of comedy, rage and frustration by Hayley Sugars and Zerlina the peasant bride seduced at her own wedding, which brought another piece of great acting and singing this time from Katie Stenzel. 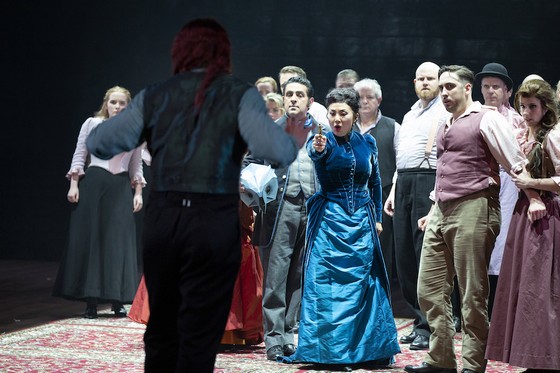 Zerlina’s husband Masetto was brilliantly played by Samuel Piper. He portrayed the fuming but compliant peasant who had to leave his wife with the aristocrat, knowing full well what was going to happen. It was a performance that evoked sympathy and compassion from the entire audience.

Once the hunt was on, Don Giovanni played the game and all is well until the ghostly statue of the Commendatore talks. Giovanni treats it as a joke and invites the statue to dinner.

But the comedy is about to end and bring this magnificent opera to its dramatic climax as the unrepentant Don Giovanni heads happily to hell.

Opera Queensland’s Don Giovanni with the Queensland Symphony Orchestra is at the Playhouse Theatre, QPAC, Brisbane from 19 October to 3 November 2018. Bookings: 136 246 or www.qpac.com.au.