Now that Robert Downey Jr has said farewell to Iron Man and the whole Marvel Cinematic Universe he is obviously looking for another potentially lucrative franchise. And he may have found one in the adventures of Dr Dolittle, the Victorian era veterinarian with the unique ability to communicate with animals of all shapes and sizes. The character was created by British author Hugh Lofting who used the character in illustrated letters he sent home to his children while serving on the front lines during WWI. He wrote the first Dr Dolittle novel in 1920, and subsequently wrote another ten novels and several short stories. 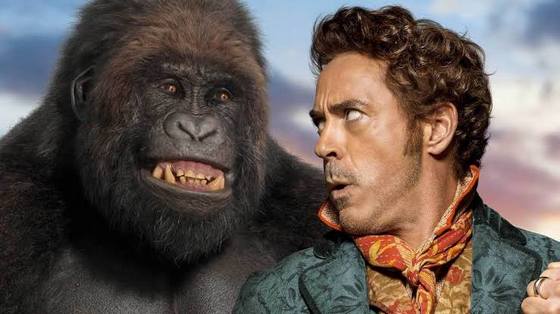 Dr Dolittle was adapted into a film musical in 1967, starring Rex Harrison (fresh off his Oscar winning success with My Fair Lady) cast as the eponymous doctor, but the film was such a flop at the box office it almost bankrupted 20th Century Fox and forestalled any other filmic treatments of Lofting’s novels. There was a short-lived animated television series in 1970. Interest in the character was briefly revived in 1998, when a stage musical based on the musical opened on Broadway; and that same year Eddie Murphy tried a more comedic and contemporary take on the character that bore little resemblance to the source. This version starring Downey jr as the doctor has been written and directed by Stephen Gaghan, a long-time associate of Stephen Soderbergh, and the Oscar winning writer of Traffic. Gaghan draws more on some of the material from the second of the Lofting novels, but this is still something of a busy and chaotic mess that may well stall the franchise before it takes off. Apparently, there was extensive reshooting following poorly received test screenings of the film. Not a good sign for a film that potentially wants to kick start a new franchise.

When the film opens, and animated sequence tells us the backstory of Doctor John Dolittle, who lived in the fictional English village of Puddleby-on-the-Marsh in the West Country and who found favour with Queen Victoria (Jessie Buckley, from Wild Rose, etc) for his work. He married, but when his wife perished during a sea voyage he cut himself off from society and shut the doors to his clinic.

But seven years later, Queen Victoria lies bedridden from a mysterious illness. Dolittle is reluctantly brought out of his isolation following a personal plea for help. He sets off on a journey to find a mysterious remote island and a possible cure. Dolittle gains a willing young apprentice in Tommy Stubbins (Harry Collett, from Dunkirk, etc), who first encounters the doctor when he brings him an injured squirrel. Stubbins acts as the narrator for many of the books.

Downey plays the character more in tune with Lofting’s original writings than either Harrison or Murphy, but he still brings some quirky, eccentric touches to his performance. But even he manages to look bored at times. It is doubtful that even his box office clout, thanks to the Marvel Cinematic Universe, will help with this misguided effort, which cost somewhere north of $175 million.
There are a couple of pantomime like villains here. Michael Sheen hams it up as the oily Dr Mudfly, Victoria’s personal physician and Dolittle’s nemesis, and yes, he does twirl his moustache here, while Jim Broadbent plays the conniving Lord Badgley. Antonio Banderas plays Rassouli, the king of the pirates who shares a history with the good doctor.

This should have been more of a swashbuckling adventure, but it remains bland and a bit dull. The tone is uneven, with many flat spots throughout. Attempts at comedy often fall flat. Gaghan seems out of his depth when handling a special effects heavy movie.

Gaghan has assembled a solid cast of vocal talent to voice the various CGI created animals that make up Dolittle’s menagerie, including Oscar winners Octavia Spencer, Emma Thompson, Rami Malek, Marion Cotillard as well as Spiderman’s Tom Holland, Ralph Fiennes, Kumail Nanjiani, Craig Robinson, John Cena and Selena Gomez. The dubbing of the animal voices is clumsy at times, but the youngsters in the audience probably won’t notice. But there are not the expected animal hijinks that would add much more energy to a family friendly offering – see films like the superb Paddington 2 and Peter Rabbit for how to do this sort of thing beautifully and convincingly.

Gaghan and co have blanded down the Dr Dolittle adventures here leaving little to amuse or entertain audiences. Adults who grew up on the books will be disappointed with the treatment of the character.