How can you stand up to a bully? That’s the question at the centre of the crime drama Dogman. 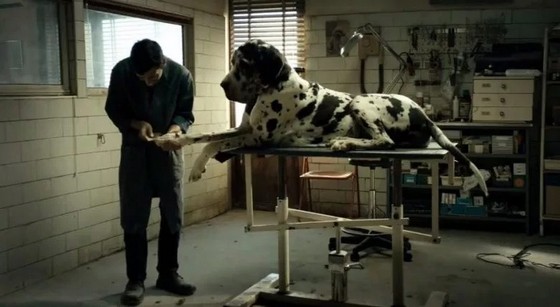 Timid dog groomer Marcello is separated from the mother of his young daughter, whom he adores … and vice versa. He lives in a barren, downtrodden Italian neighbourhood and gets on well with everyone. To make some money on the side he sells cocaine. One guy who does as he pleases and takes advantage of their relationship is the fearsome thug Simone. He thinks on no-one but himself and he deals with any obstacles by physically lashing out. When Simone says “jump”, Marcello inevitably accedes. At one point, Simone puts Marcello into an untenable position that has drastic consequences for both of them.

Art house in style, Dogman – which is the name of Marcello’s business – paints a grim portrait. It was freely inspired by a crime story that happened 30 years ago.

Marcello Fonte does a fine job portraying the lead character as pleasant but subjugated, notwithstanding the immorality of what he is doing on the side. Edoardo Pesce need not speak much. His non-verbal cues and body language say it all. He inhabits the brutish Simone so induce loathing.

The  screenplay by Ugo Chiti, Matteo Garrone and Massimo Gaudioso takes a few unexpected turns and the movie is all the better as a result. Directed by Garrone, Dogman is far from a traditional formulaic Hollywood revenge thriller.

You wonder why Marcello befriended Simone in the first instance and why police have allowed Simone to get away with what he has gotten away with for so long – for his stock in trade is intimidation and fear mongering. There is a definite European sensibility to what is a slow-burn picture that will only appeal to selective tastes. I thought highly of it.

Dogman provokes reflection about how else the situated presented could have been dealt with … with a more favourable outcome for all concerned.