If The Room isn’t the worst commercially released movie of all time, I don’t know what is. It’s badly acted and directed, and its script doesn’t make any sense. Against all expectations though, it has developed a cult following, with midnight screenings around the world selling out.

Made for a reported US$6 million (of writer, director, producer and star Tommy Wiseau’s own money), it took US$1,800 on its first weekend from the one screen where it played. If you can believe this, Wiseau booked out the theatre for a fortnight’s run so that it could be considered for an Oscar. Fortunately the Academy thought better of it and passed. 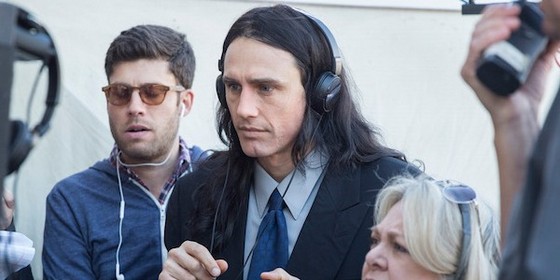 Mind you, Wiseau has arguably had the last laugh. While other Oscar winners and nominees have largely been consigned to history, The Room continues to be shown on the big screen. And now it will, no doubt, receive an extra kick, with James Franco directing and starring in The Disaster Artist, a backgrounder that shows how The Room came to be.

Scott Neustadter and Michael H. Weber (The Fault in Our Stars) wrote the screenplay. It’s based on a book by Wiseau’s friend Greg Sestero and Tom Bissell, titled The Disaster Artist: My Life Inside The Room, the Greatest Bad Movie Ever Made.

While initial appreciation of The Disaster Artist would undoubtedly be assisted by having seen The Room, that’s far from mandatory. If you haven’t, it may take a few minutes to work out just what’s happening. But because part of the movie replicates scenes from The Room, you’ll pick up the gist soon enough.

Many of the strong cast bear a striking similarity to the actors from The Room. They’re led from the front by a deliberately horrible acting performance from James Franco as Wiseau. It is the stuff of pure genius. Think of Meryl Streep’s off-key singing in Florence Foster Jenkins.

Franco’s younger brother Dave plays Sestero, who befriends Tommy when they both taking acting classes. Zac Efron’s overacting is priceless. Seth Rogen plays the frequently nonplussed director of photographer. Jackie Weaver gets a gig and her character is literally overheated. And Franco has wisely even given Wiseau himself a small part in The Disaster Artist. How delicious!

The picture portrays Wiseau as a complete fruit loop. Why else would it be that he point blank refuses to acknowledge a heavy European accent and broken English, even though he maintains he was born in America? Why does he clearly lie about his age and avoid answering questions about himself? Still, the filmmakers have milked all of that and more to create a truly memorable work that plays on the weird and wacky.

And how fitting that this reverential take on The Room is far, far, far superior to the movie that prompted it. Let me conclude with an important footnote: do not leave the cinema when the words “The End” appear on screen. After that, you get to see a series of original scenes from The Room side-by-side with loving replicas in The Disaster Artist.