My 1953 edition of Webster’s Dictionary provides this definition of diplomacy: “dexterity; skill; tact; shrewdness in managing affairs of any kind”. And these are exactly the qualities which writer Cyril Gély has so cleverly enshrined in his masterpiece play Diplomacy.

Originally written in French, the translation and adapted version by Julie Rose I’m sure has not lost any power. The plot, the script, the acting and the production is as tight as you’ll ever see. 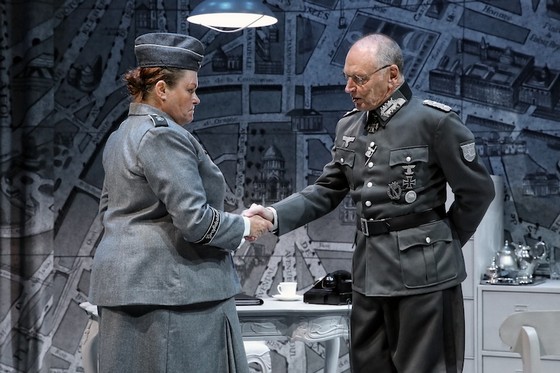 Diplomacy is set in the suite of the German Army General Dietrich von Choltitz (John Bell) at the Hotel Maurice in Paris. It’s pre-dawn on 25 August 1944 and Choltitz is finalising plans to destroy Paris, on orders from Adolf Hitler. It’s a busy room. With bombing heard in the distance, the Americans and French are only 20 miles away, so the General is fielding phone calls and issuing orders whilst his orderly, Frau Mayer (Genevieve Lemon) is concerned that he has his essential medications at hand. The sentry Hans Brensdorf (Joseph Raggatt) is outside the room ensuring the General is not unnecessarily disturbed.

When Engineering Officer Werner Ebernach (James Lugton) visits, the full extent of Hitler’s orders are revealed. They are astounding in scope: 30 bridges across the Seine will be blown up, along with notable landmarks such as the Arc de Triomphe, Eiffel Tower and the Notre Dame Cathedral. Debris from the collapsed bridges will dam the river, thereby flooding most of Paris. The anticipated civilian death toll exceeds one million. The General is a true soldier. He is cold, emotionless and will execute his orders no matter what. During a brief blackout, the Consul-General of Sweden in Paris, Raoul Nordling (John Gaden) mysteriously appears.

The story from this point onwards is engrossing. Cyril Gély builds the drama slowly through initial small talk between the two protagonists, sprinkled with some humorous word plays. Can Nordling convince Choltitz to disobey his orders? We all know the outcome. But how the characters get there must be one of the greatest diplomatic episodes of World War II. Oh, to have seen Hitler get the news would have been worth the ticket price! It’s exciting to experience.

Diplomacy is more than a simple recreation of a historical event. It’s an enlightening insight into a military General’s mindset as he tries to balance his oath of allegiance against a greater humanitarian force.

John Bell as director ensures that the power of the script is enhanced through timely movement around the stage and masterful facial expressions.

John Bell as the Army General and John Gaden as the Consul-General demonstrate why they are two of Australia’s finest dramatic actors. Their performances were a joy to watch as they went about their battle of wits. The great supporting cast gave them a solid base to shine from. 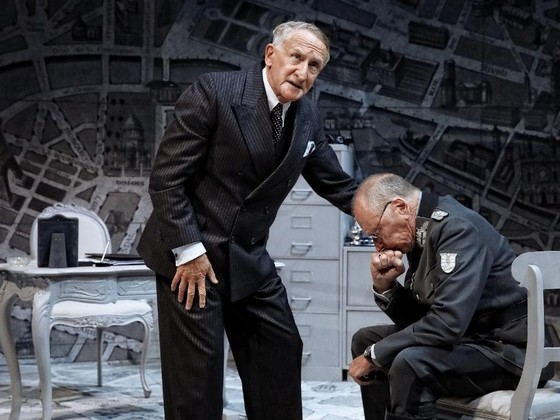 Full marks to set designer Michael Scott-Mitchell. The floor and walls of the set were a huge monochrome map of Paris, helping to signify the full extent of the Nazi occupation. Tourists staying in majestic Paris hotels will want to be careful after seeing this set as well! The all-round success of this production would not be possible without the professionalism of the creatives. Detailed costuming (Genevieve Graham), effective lighting (Matt Cox) and brilliant sound effects (Nate Edmondson) all contributed to setting a tense mood in the theatre.

Diplomacy is a remarkable story and a remarkable play. For those interested in the lessons of history, mark this one in red on your theatrical calendar!

This production of Diplomacy is showing at Ensemble Theatre, 78 McDougall Street,  Kirribilli until 13 July 2019. Bookings: www.ensemble.com.au