This is the third feature length documentary from Oscar winning director Asif Kapadia, who previously gave us the superb, well-researched and insightful documentaries Amy (2015), about the late singer Amy Winehouse, and Senna (2010), about the late Formula 1 race driver Ayrton Senna, which were two of the finest documentaries of the past decade. For his latest film though Kapadia profiles someone who’s still alive – Diego Maradona, widely regarded as one of the greatest football players of all time. 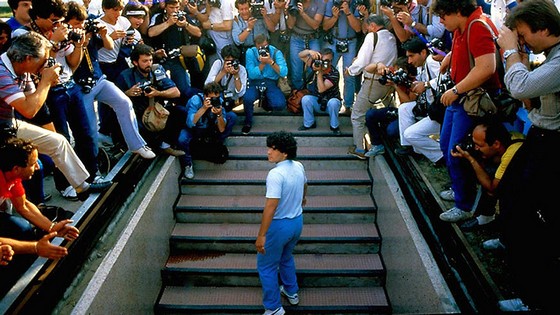 The film traces his rise from an impoverished background in the slums of Buenos Aires to the top of the game. There’s a little information about his time playing for Barcelona, but the film mainly concentrates on the eight years he spent with SSC Napoli in the 1980s and his subsequent fall from grace. The struggling club paid a then-record fee to lure the flamboyant and gifted player, and he rewarded them by bringing success to the lowly ranked club. But Naples was also responsible for his eventual downfall, as Maradona became involved with drugs and the local Mafia. There was also the scandal of his illegitimate son, and his lavish lifestyle also upset many in the poverty stricken town. But the breaking point for the citizens of Naples came when he played for his native Argentina in the World Cup Final and beat Italy.

Working with his regular editor Chris King, Kapadia has drawn upon over 500 hours of never before seen archival footage, much of it accessed from Maradona’s own personal collection, to assemble this portrait of the gifted player and to trace his rise and fall. There is no traditional voice-over narration here. Rather Kapadia lets the vision and the many interviews with the man himself and many of his contemporaries tell the story.

Kapadia also explores the dichotomy of Maradona’s personality as he often refers to himself by two names – Diego was a quiet, unassuming street kid who just wanted to enjoy life, while his Maradona persona was a construct to help him cope with his fame and the pressures of football and being in the spotlight. But Kapadia also captures his sense of hubris and arrogance. The final scenes capture Maradona as he looks today – grossly overweight and disillusioned, and a shadow of his former self.

However, given its rather narrow focus and an overly generous running time of 130 minutes, we never really get a full picture of the man behind the myth. For the non-sporting types though there is probably too much soccer and not enough insights into the complex reasons for his fall from favour. Diego Maradona is the lesser of Kapadia’s three documentaries about famous and talented people who were ultimately destroyed by their own fame.