Nicole Kidman is virtually unrecognisable for much of Destroyer. Her hair is dishevelled, and her face is blemished and hollow. Her eyes have no life in them and it’s difficult to make out what she’s saying. Talk about bleeding for your art. 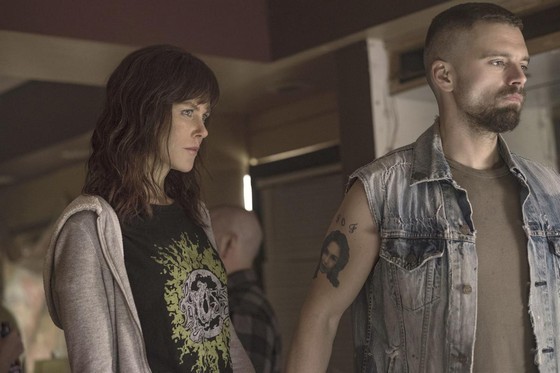 As a young detective, Erin Bell (Kidman) and her partner Chris (Sebastian Stan) went undercover to infiltrate a notorious criminal gang controlled by the dangerously unstable Silas (Toby Kebbell).  But the operation ended in tragedy and has taken an awful toll on Bell’s life. Years later, struggling to maintain a relationship with her daughter and still haunted by her past, Bell embarks on a mission for redemption when it appears Silas has re-emerged.

It begins with the arrival of a note in the office mail and takes Bell through the underbelly of Los Angeles and nearby desert communities. One by one, she tracks down the gang leader’s former cohorts, including Petra (Tatiana Maslany), Silas’ onetime lover and current errand girl. During her obsessive search, Bell’s mind floods with memories of her undercover days with Silas’ gang. Especially painful are her recollections of Chris, the FBI partner with whom she had a brief but meaningful romance.

Destroyer is a gritty, complex crime thriller directed by Karyn Kusama. The screenplay is from Phil Hay and Matt Manfredi, who worked with Kusama on The Invitation.

This just may be Kidman’s best performance (she was nominated for a Golden Globe for this portrayal, but missed out on an Oscar nomination). And in saying that, I’m talking about an actor who’s already won an Academy Award and been nominated four times. This role requires her to be dour, gritty and barely existing. Big ticks for all three.

Destroyer takes its time to unravel Bell’s back story. Clearly this woman has had the stuffing knocked out of her. But with no introduction to her physical and mental state (she just appears terribly out of sorts in the driver’s seat of a car that has seen better days), we have no context. Of course, that’s the whole point. Pieces of the puzzle are fed to us in dribs and drabs. The narrative unfolds in two timeframes – now and nearly 20 years ago.

Destroyer has a seedy underbelly. Everything about it looks and feels dirty. Not everything will be wrapped up in a neat bow. Rather, this is a film that requires work. You need to concentrate to  follow the threads and get the most out of the experience.

Destroyer is a small-audience film that packs plenty of punch. I certainly bought into it.