Events revolve around a difficult 17-year-old gay girl, Xan (Eva Seymour) who doesn’t warm to interaction with other family members. About to graduate from high school, she’s perpetually sullen and angry. Her older brother, Jamie (Darcy Kent), who doesn’t live at home, is back for a couple of days. He has a secret. 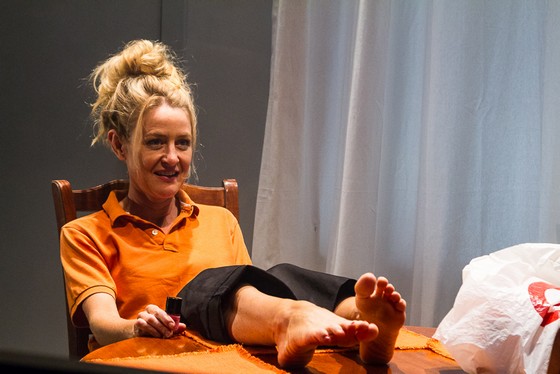 He has his first real girlfriend, Abby (Ella Caldwell). She’s an older woman with a child. Jamie he has deliberately neglected to mention this to his family. Mum, Crystal (Sarah Sutherland) is somewhat taken aback. Dad, Rico (Joe Petruzzi), is a knockabout sort with a recent penchant for karaoke and a tendency to say embarrassing things. He also has his concerns about the future.

The clan stumbles around in the dark, not really knowing what to say to one another, but just getting by as best they can. You could reasonably argue that this is true of many families. One thing is clear, that is that Xan is having a rough time of things. She’s fighting what appears to be a losing battle – dealing with issues she can’t or won’t talk about because it is too painful to do so.

The tension between life’s routine, the casual rhythm of family, the assumption of “normality” and the sudden possibility of catastrophe is the jumping off point for desert, 6:29 pm.

Seymour lays it on the line as Xan in a role that demands attention. Depression and suicide are in play here. Her fellow cast members, too, all have opportunities to shine.

The 90-minute play (without interval) unfolds in a series of scenes, some lasting several minutes and others but seconds. The set is divided into two, in front of which sits a most effective time-framed open vista. It gives the impression that we will be peering into the lives of those behind the see-through wall, which we indeed do. 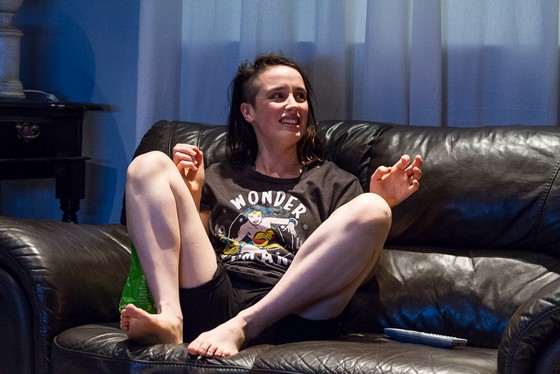 Bridget Balodis directs the play from Morgan Rose’s script. I felt that script – developed through Red Stitch’s INK new playwriting program – needed tightening. A number of scenes could have been dispensed with without affecting the flow. Not all the action was as compelling as it could have been. Some fell wide of the mark. Mind you, there were humorous interchanges that hit the target.

So, while desert, 6:29 pm is certainly not without merit, it would benefit from a little bit more work. It is playing at Red Stitch Theatre in St Kilda until 14 December 2017.