Well crafted, well researched and sharply edited, Descent into the Maelstrom serves up a warts-and-all look at the rise and turbulent times of seminal Australian rock band Radio Birdman. Formed in 1974, the band was at the forefront of the punk new wave scene in the 70s. They came about when American-born medical student Deniz Tek shared a house in the Sydney suburb of Kensington with musician Ron Keeley. The band comprised Tek, lead singer and songwriter Rob Younger, Pip Hoyle, Warwick Gilbert, Keeley and drummer Chris Musuak. 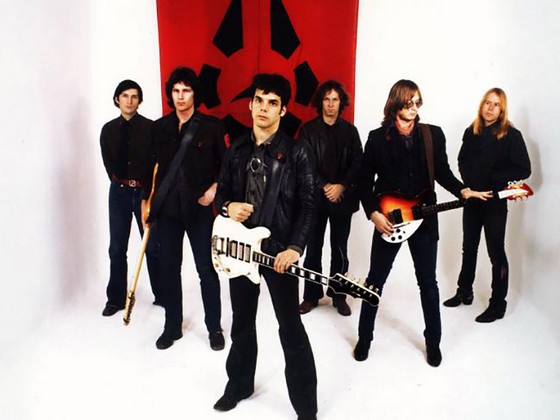 Guitarist Tek was influenced by the likes of the MC5 and The Stooges. Radio Birdman were known for their outrageous stage shows, their anti-establishment attitude, and their unwillingness to compromise or pay attention to current musical trends. The band was thrown out of numerous venues, but they managed to attract a dedicated fan base. It was the era of Countdown and bland pop. But Radio Birdman were definitely not Countdown material. Their gigs at the Funhouse in Sydney inspired future bands like The Angels, Midnight Oil and Cold Chisel, so their influence on the local music scene cannot be ignored.

Director Jonathan Sequeira gives us a frank, warts-and-all look at the band and the internal tensions that led to a split just as the band had been sired to Sire Records in London. He gives all of the former band members equal time to give their perspective of the Radio Birdman story. Former band members come across as bitter as they recount their stories of the band’s short lived and volatile heyday. He also talks to roadies and loyal fans to give a complete overview of the band’s rise and fall. The title for the film comes from a song on the band’s debut album Radios Appear, and it is a fitting title for this look at a dysfunctional band tearing itself apart internally.

The rot set in soon after the band set out for London. Sequeira interviews all of the former band members and teases out lots of revelations about the band and their internal conflicts and opens some old painful wounds. They are brutally honest about the combustible chemistry within the band and they air their dissatisfaction about the tensions and interpersonal relationships that eventually tore the band apart just as they were reaching fame abroad. The band broke up in 1978 during the recording of their second album in London.

The band reformed for a gig at the Big Day Out in 1996, which brought back bitter memories of those early tensions. In 2007 Radio Birdman was inducted into the ARIA Hall of Fame, although this achievement didn’t end the infighting as resentments still lingered. Musuak in particular remains bitter at his sacking from the band in 2012. Tek and Younger though still retain their passion for the music and their band.

Sequeira worked as an editor for the ABC for a couple of decades, including the iconic movie review show At The Movies, and he makes his feature film directorial debut here. He has managed to assemble plenty of rare archival footage of the band’s early years in the Sydney pub rock scene, and these clips capture the band’s anarchic style and energetic stage presence. There are also some crude animations from bassist Warwick Gilbert used effectively to illustrate some key moments in the band’s history.

Descent into the Maelstrom follows other recent music documentaries like the superb Amy, Janis Joplin: Little Girl Blue, Metallica: Some Kind of Monster and Gimme Danger, but this one is certainly not a hagiography. more for fans of the band as it offers up little that is particularly new. And at an overly generous 109 minutes it seems a little long and repetitive.

Descent into the Maelstrom is currently showing at selected times and venues. Go to the official website for details of when and where you can see it.