Queensland Theatre’s Death of a Salesman was a mighty production of a mighty play with a virtuoso performance from Peter Kowitz as Willy Loman, the salesman in question. He was on stage for almost the whole two hours plus of the production and held the audience enthralled by his performance as he slid from time-zone to time-zone without even a change of costume. 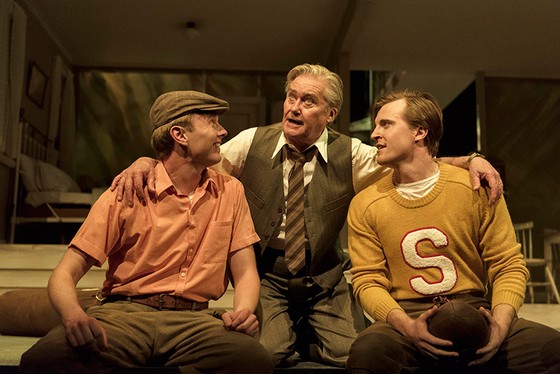 His mastery of the role was total as we saw him go from super-salesman with sons he dreamed would eclipse his own life and bring glory to the family to the brain-ravaged, desperate old man  sliding into dementia.

Jason Klarwein’s direction was impeccable as he brought his cast of nine through a highly technical and original production. With mood lighting and sound there was never any doubt as to which time zone we were in and the pace was tight and energised. The set was one of the most imaginative I have seen for a while, so full credit goes to Richard Roberts.

A quote I dislike a lot is “It’s as relevant today as it was when it was written”. Nine times out of ten the play is not; but this one, which is 70 years old and is remarkable in reflecting life today.

Willy is old and tired after a life on the road, but is cast out by an uncaring man who inherited the business. No one cares that he can’t pay his mortgage or insurance and, even at his stage of life, still owes time payments on household goods. He lives in a world where millionaires abound, living standards are dropping and the working man is being ground down. There is an abounding feeling of hopelessness in Willy and his family as conflict between him and his two sons, Happy and Biff, rage in the eternal battle between past and future.

Son Biff, who had been roaming the country restlessly since his expected career as pro footballer foundered, had returned home to resume is conflict with his father, a conflict for a long time unexplained. This is another powerful and explosive performance this time from Thomas Larkin. Some scenes between Biff and Willy were gut wrenching. Happy, the younger son has feckless outlook on life and spends his time winning favours from adoring women. Jackson McGovern made a terrific foil for Thomas Larkin.

In the middle of the battle is Linda Loman, the staunchly loyal and stoic wife. She is convincingly played by Angie Millican. And Kevin Hides, looking every inch a “Big Daddy” supplied the ghostly presence of Uncle Ben, the one big success story of the family and Willy’s hero.

Charles Allen, Sarah Ogden, Ilia Swindella and Gemma Willing played the many minor but important roles to add to the drama. The set, lighting and sound were faultless in a production that had power and glory. The power was on the stage and the glory on the page. It was a memorable night in the theatre that received a well-earned standing ovation.

Death of a Salesman is playing at the Playhouse Theatre, QPAC, Brisbane till 2 March 2019. Bookings: 136 246 or www.qpac.com.au