Safely ensconced here in the Southern Hemisphere, few Australians have first-hand experience of America’s sometimes-toxic racial politics. In general, we experience it from afar, via either the news or some other media (like the recent film Get Out). Our national experience, while arguably no better than the USA’s, is however markedly different. So the Netflix series Dear White People is a kind of window through which we can peer into American perspectives on race and culture. 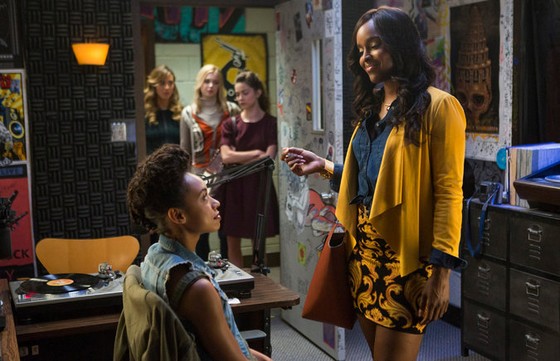 The series is set in a fictional Ivy League college. The majority of the students are white, but the show centres on the campus’s “historically-black” dorm. Things kick off when a preppie fraternity on campus holds a black-face Halloween party. In a meta move, this frat house is dubbed Pastiche; thus making it both a literal and figurative pastiche. The party is broken up by campus police, but the incident provides plenty of ammunition for outspoken campus radio host Samantha – “Sam”- White (Logan Browning). In the pilot, Sam’s barbs find a mark primarily among the university’s black caucus, a body as fractured by division as any other. The radicals want more radical action, the activists want to use the incident to highlight broader issues, and the rich kids want to tut-tut but move on. But a revelation about Sam’s life threatens to derail everything.

The show adopts a somewhat fractured approach to the story and the characters. The first episode concentrates on Sam; but the second features student journalist Lionel (DeRon Horton), while the third focuses on Troy (Brandon P Bell), son of the university’s (black) president. As it trips around the characters, the show brings different perspectives to the material.

While the show caused something of a meltdown on social media recently, it’s actually just as much a coming-of-age tale as it is a polemic on race. The rarefied atmosphere of the university is plainly intended as a microcosm for society as a whole, but it also provides a proving ground in which the primarily young people in the show can find their own identities. And it works best when it’s in exploring that dynamic among the characters.

Not everything about Dear White People rings true however. Some of the situations feel rather contrived, while at least a few of the characters are arguably stereotypes in themselves. Again, perhaps this is a kind of meta device by the writers and creator Justin Simien (who has adapted the series from his feature film of the same name) – to highlight the dangers of stereotypes by using stereotypes – but if so, the conceit sometimes falls flat.

Underpinning all this is a kind of elevated soap, in which the everyday conflagrations of dating, cliques and career provide sparks to keep you watching. In a different environment, this could be Friends – with politics.

In the end, despite being a considerable distance from the subject-matter, I still find myself drawn back to Dear White People. Even if it doesn’t work 100% of the time, there’s some smart and perceptive writing going on here. So while the politics might be rather opaque, the human drama makes it worth a look.