Based on an epic book series by Stephen King, The Dark Tower lacks the gravitas I would have expected.

The last gunslinger, Roland Deschain (Idris Elba), has been locked in an eternal battle with Walter O’Dim, also known as the man in black (Matthew McConaughey). Deschain is determined to prevent O’Dim from toppling the Dark Tower. The Tower is what holds the universe together. With the fate of multiple worlds at stake, good and evil collide. 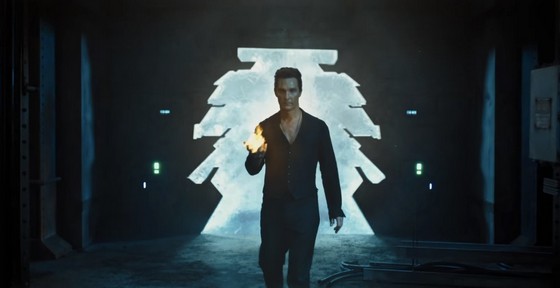 “The man in black fled across the desert and the gunslinger followed.” With those words, King sparked an entire universe. King was influenced to create his magnum opus by blending together several unlikely sources. These included Lord of the Rings; The Good, the Bad, and the Ugly; and Clint Eastwood’s Man with No Name.

It inspired millions of readers – not least of which was a young Danish boy whose imagination was sparked by the events in Mid-World. Director Nikolaj Arcel was determined to be the one to bring The Dark Tower to the screen. Growing up with the Dark Tower books, Arcel became so immersed in them that he taught himself English.

I knew nothing of King’s books, so I had no preconceptions entering the cinema. I liked the set-up. The scene was well established, with the 14-year-old outsider Jake having nightmarish visions that were dismissed as a mental disorder.

I thought Tom Taylor was well cast in the lead role. Elba (Prometheus) also gains traction as the shy silent type and the youngster’s mentor. McConaughey (Dallas Buyers Club) though was a picture of ridiculousness as the evil O’Dim. His dialogue, too, gave him little latitude in giving his character any credibility.

As with all these types of stories, it got down to a battle between the proverbial white hats and the black, with the inevitable showdown between the key characters. I felt that was pedestrian. Overall then, The Dark Tower is a mixed bag that fails to live up to its pedigree. Rated M, it scores a 5 out of 10.