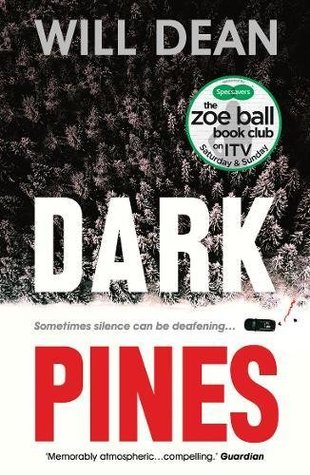 Dark Pines, the debut novel for Will Dean, is set in Gavrik, a small town in the county of Värmland in Western Sweden. Tuva Moodyson, the main character, is the chief reporter for its weekly newspaper, the Gavrik Posten. Although she grew up in Sweden Tuva has spent a number of years abroad and has only returned to Sweden to be near her terminally ill mother. As a result she feels like an outsider, this feeling is reinforced by the fact that Tuva is also deaf.

When the mutilated body of a hunter, whose injuries match those of a series of unsolved murders many years previously, is found in the nearby Utgard Forest Tuva sees a chance to make a name for herself and escape the confines of small town Gavrik. To do so however Tuva must not only venture to Mossen Village, a tiny collection of houses, with some very strange inhabitants, perched just inside the forest, she must also venture into the vast and unknowable Utgard Forest itself. A task which should require all of your senses, but when one is lacking that task becomes a highly dangerous one.

Running throughout Dark Pines is a strong sense of isolation. There is the geographical isolation of the town, the village and the forest, each of them in turn more isolated than the other. There is the population of Gavrik itself who may read Tuva’s words in their newspaper but still suspiciously view her as an outsider. This suspicion is only amplified when Tuva starts to write about the murders past and present. I should add that she is not the only one who feels the town’s frosty indifference. Tammy, Tuva’s best friend, serves Thai take-away to Gavrik’s ungrateful residents. Finally there is Tuva’s own personal isolation due to her deafness, something of which is both an impedent and also at times, an advantage.

Dean does however provide a balance to this sense of isolation and he does this through the first person narration of Tuva herself. We not only get to know her thoughts, her history, her doubts and hopes, we also get a real sense of the day to day things which make up her life. Dark Pines is not however a full-on confessional and there are parts of Tuva’s life which are only hinted at and in doing so this leaves plenty of room for future books. This is something which we can certainly be grateful for because Dark Pines is a very enjoyable debut and Tuva is a character you’ll want to spend more time with in future.