“Before Arthur the King, the Sword of Power chose a Queen.” If Cursed piqued your interest as you have a thing for the Arthurian legends, then hail young fellow or lass, well met, dive right in. Park your cynicism at the door and enjoy the lush scenery. 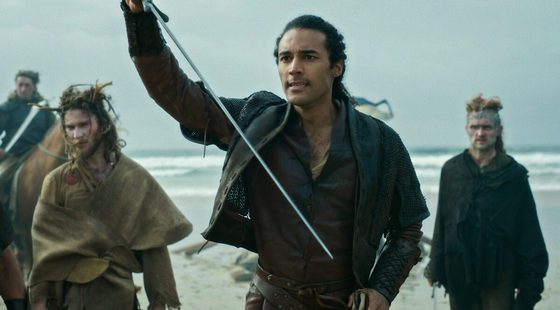 Touched by darkness and shunned by her people, Nimue (Katherine Langford) is the daughter of a priestess who must tow the line when it comes to respecting the customs of her faith, and doing what the spirits direct her to do.  Able to call upon unseen earth forces to protect her in times of trouble, Nimue’s gifts make her a target for all that believe such powers should not be in the control of a volatile young woman.

On returning from failing to catch the ship which was to carry her away from her homeland, Nimue encounters a massacre. The evil Red Paladins (suitably robed) are on a mission to rid England of its pagans (the collective fey). Nimue’s mother, on her last gasp after being stabbed, entrusts a mysterious sword to Nimue (guess which one sports fans) to take to Merlin.  Any old Merlin, perhaps.  It is this sword that later comes to Nimue’s aid before she runs into the young knight Arthur for the very first time.

It is near impossible to go in cold to yet another re-imagining of the Arthurian legends if you are over the age of ten.  Viewing through that lens, sure, you are going to injure yourself with your next level eye rolling if you manage to make it through the first couple of episodes of Cursed.  This is kind of The Last Kingdom for kids.  Lots of sweeping tracking shots, grubby villagers, beautiful green English landscapes and doomed quests.  Also – notably stingy in the budget when it came to such vitals as sourcing credible crowd scenes and solid casting.

Australian actor Katherine Langford, best known for her two series turn in 13 Reasons Why, doesn’t appear the slightest bit comfortable in this teen marked drama that seems to be throwing a lot into the dish at first serve.  Swords, murdering monks, a drunk evil Merlin, an identity flipped Arthur, a green witch, vague threats of impending doom and ‘the sight’.  Perhaps this’ll even out further in, but it’s a bewildering mess in the first couple of episodes.

The animation of travel between scenes (eg swooping up to a character before he or she speaks) is a nice inclusion that adds value to the narrative breaks.

All in for giving Camelot’s ‘Lady of the Lake’ a bigger focus in this most English of fantasy universes, but this smudging of the two story arcs of ‘the lady’ and King Arthur needed a lot more work before being released to the script writers.  Though of course quite a good drawcard, offering up ‘the lady’ as a romantic contemporary was obviously to attract the beating hearts of its teenage market.  There’s unfortunately zero chemistry there between Arthur (Devon Terrell) and Nimue however, even with a play fight scene that you’d presume was meant to be erotically charged in some way.

If you’re something of a Camelotian, perhaps shut that one fine and discerning eye or you will have a terrible time with Cursed.  Your kids should love it, you might however find yourself double screening as you drift in and out of the show.  Cursed is escapist fantasy that the world could probably make good use of right now.

Cursed is streaming now on Netflix. Season two has not yet been confirmed for production.