Twenty novels and twenty years later, British crime author Mark Billingham takes his fans back to where it all began with his latest crime fiction thriller, Cry Baby.  The year is 1996, and Detective Sergeant Tom Thorne is already a ten year veteran of nightmares born from a case that will never leave him. 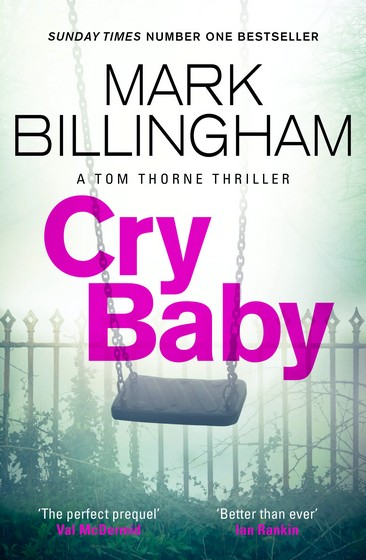 With his workmates being a good mixture of both the inept and the insightful, Thorne always expects a hammering now and then for his past actions on the job. There is also always the possibility with every case of a new cock up to provide fresh cannon fodder for future ribbings.  All every cop can talk about this summer is the football, and Thorne is right there with them with wanting to sneak a listen to the nation’s scores whenever he can.

Taking advantage of a warm day. Maria and Catrin take their two seven year old sons down to the local park to run around on the equipment and play hide and seek in the bordering woods. It is an ‘occasion’ playdate in that Josh and Kieron are soon to attend separate schools.  The two mothers have very different backgrounds, but what they have in common is that they are both parenting alone.  Maria’s ex husband is still somewhat in her life, and Catrin’s partner is doing a two year stint for not being able to keep his fists to himself.  On this day as Maria is in charge of watching the two boys, enjoying a sneaky fag, the unthinkable happens – Catrin’s son Kieron goes missing.

Cry Baby is something of an ‘all stars’ series pre-quel in which we get to have a decent gander as to what the British police detective was like in the early days, before Thorne’s job hammers him into the ground like a tent peg. These are the giddy days before the internet truly had kicked off in the metropolitan police force, and mobiles are still either bricks or carphones.  Writing in this low-tech era presented a few historical challenges to the author, and the occasional references to events of the time are choice little Easter eggs scattered throughout.

The crime plot of Cry Baby is a little less complex than what we’ve come to expect of Billingham, but the recommendation is still the same.  Billingham is a ‘must read’ author for any fan of screechingly good crime fiction (or drama fiction, if that’s where your tastes slant) and his work has warranted that opinion right from the very first novel in the Tom Thorne series, Sleepyhead.

Thorne’s most important relationship, that of his friendship with medical examiner Phil Hendricks (a little gift of a character to readers of crime fiction), isn’t given a huge amount of page time in Cry Baby but it is SO welcomed, and very much like spotting a pop star in your favourite soap.  Tom Thorne, way back when, is just as chill a character as he appears in later novels, presenting a composed face to the world as he considers the casual dismembering of those that annoy him on the regular.

Cry Baby is a panoramic read also, in that there is just as much page time given to the families left behind as there is to the actions of the investigating police as they attempt to locate the missing child.  All stakeholders are presented. No opportunity is wasted.

Mark Billingham has proven himself to be both a talented and mixed bag of tricks over the years and has popped up on everything from the stage at Glastonbury to a UKTV podcast, A Stab in the Dark.  Cry Baby is the seventeenth entry in the Tom Thorne series, earlier novels of which have been adapted for television.