Cry Baby is an American musical from 2007. It’s based on a John Waters film, as was the musical Hairspray, which ran on Broadway for 2,642 performances. Cry Baby managed only 45 previews and 68 performances. One was a mega hit the other a mega flop.

However, Cry Baby at The Hayes Theatre belies those facts. For this production, led by director Alexander Berlage, is a great big booming hit (or, a great big piece of clever persiflage, perhaps?). 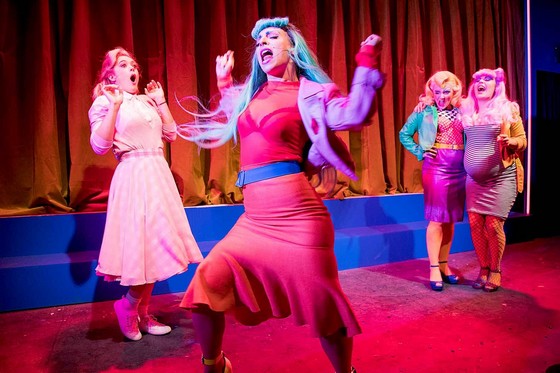 It concerns the star crossed lovers, Allison (Ashleigh Rubenach) belonging to the pastel ‘squares’ of a Baltimore environ and the other-side-of-the-tracks vivid ‘drape’, Wade ‘Cry Baby’ Walker (Christian Charisiou). Like Juliet and Romeo they fall in love and nothing much runs smoothly until the end. The Eisenhower-era American Dream culture is being assaulted by a youthful revolution to the beat of the iconoclastic threat of rock ‘n roll led by Cry Baby (a Johnny Ray sound-alike, a precursor to Elvis), who with his ‘kooky’ (draped) crowd invade and uproot the dullness of his home town – but not without punitive overload.

John Waters known as the ‘King of Bad Taste’ or the ‘Pope of Trash’ made the film Cry Baby in 1990. It starred Johnny Depp, in the middle of his career when he had mainlined the mainstream and gone commercial. The musical is a sanitised Waters effort, made for popular consumption. That still, though, has enough subversive satiric (if not quite satanic) patter to keep a gurgling comic response coming from its audience. The ridiculous (read, stupidly funny) book (Mark O’Donnell and Thomas Meehan) and the smart lyrics (David Javerbaum and Adam Schlesinger) are well served by the sound design of Tegan Nicholls (an unusual achievement in the Hayes in my experience).

In this production, Isabel Hudson has created a set design that has a candy stick explosion of red and white stripes, booby trapped with wall and floor door flaps for pop-out appearances from a tireless ensemble of incredibly energised ‘youngsters’. They twirl about in eye-boggling, outrageously conceived costumes by Mason Browne, some whip smart wiggery (Wigs by Vanity) and make-up (Oliver Levi-Malouf).

Mr Charisiou and Ms Rubenach are incredibly gifted vocally, and within the cartoonish needs of this genre, give impeccable and well judged performances. But, then, so do they all, right across the casting board: Joel Granger, as the sneaky goody-goody villain of the piece, Baldwin; Laura Murphy, the nutter of the piece – serious stalker, Lenora Frigid; Alfie Gledhill, the seriously talented ‘Mercutio’ support to the hero – Dupree; and a wonderfully sustained performance of 50’s caricature of hypocrisy, by Beth Daly, as Mrs Vernon-Williams – awful but likeable. There is a gang of seriously young groupies: Hatchetface (Manon Gunderson-Briggs), Wanda (Amy Hack), Pepper (Bronte Florian) and an Ensemble, led by wickedly ‘camp’ Blake Erickson, in a series of don’t-blink-or-you-might-miss-’em cameos that inspires crazy but disciplined work from Brooke Almond, Hayden Baum, Aaron Gobby and Ksenia Zofi. 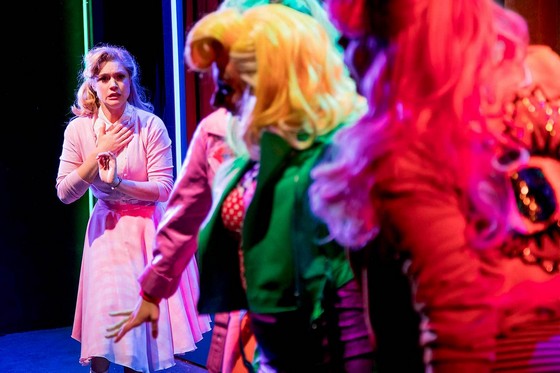 It is the sheer full-on energy of the production propelled by the gaspingly brilliant choreography of Cameron Mitchell – wait till you see the bravura piece: Jailyard Jubilee! (inspired by Elvis and his “Jailhouse Rock”) – and the musical direction of Nichols Griffin with a small band of four that takes you by the scruff of the neck and hurls you into the mindless madness of this invention.

Cry Baby is not deep. The characters are 2D caricatures. There are no real emotional demands. The material aims at a ‘campy’ soft satire. Or is it cleverer than I think – disturbingly clever? Hmmm? Whaever! There’s talent galore on stage that serves the material impeccably and it did overwhelm me – you. Well, you were cheering, weren’t you?

You can catch Cry Baby at the Hayes Theatre, Greenknowe Ave, Darlinghurst until 19 August 2018.