A fascinating, at times most humorous insight into a dystopian future, what is in play here is a power struggle. Ultimately, Control is about attempting to subvert a dehumanising system and allowing natural instincts to dictate the way forward. The play – a world premiere work written by Keziah Warner – is divided into three distinct parts.

The first concerns a global television program shot while a crew of four is on its way to Mars having spent seven months getting there. Constantly filmed, the two men and two women are encouraged to play roles that will win more viewers. Taken aside one by one, they are given challenges (think television’s Big Brother), with financial rewards for success.

They are also fed prompts such as “I’m looking forward to getting home because …” and “What will I miss most about life on Earth?” and their answers passed or failed. Any time they swear, a buzzer sounds, but something seems to be amiss as the cameras don’t always work and an alarm indicating trouble sounds quite frequently. The ordeal is wearing on the intrepid travellers and then … catastrophe!

Twenty years later, we are in what is called “The Museum of Childhood”, where memories are captured and once uploaded can’t be deleted. And yet that is exactly what one employee and a user – the half-brother of one of those on the pod to Mars two decades earlier – are desperate to do. Artificial intelligence has evolved to the point where the “assistants” almost replicate humans, but it emerges that speaking slowly or very fast means you aren’t being heard all the time.

In the final act, a further three decades on, a human is training a highly advanced robot who is particularly quick on the update. In fact, for all intents and purposes “she” appears to take on human characteristics. She can be inquisitive, sympathetic, empathetic, compassionate, flirtatious, disdainful and aggressive. But these behaviours can be dialled up or down depending upon the programmer’s whim. The teacher builds quite an affinity with the bot. 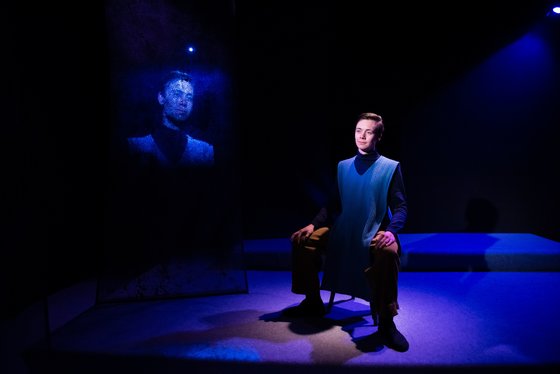 I was intrigued and engaged throughout the 90 minutes without interval in what is a mind bender, a frightening look into a possible future. Warner has cleverly ensured that there is a mix of drama, pathos and amusement. The laughs were certainly plentiful on opening night. All four actors – Christina O’Neill, Dushan Philips, Samuel Rowe and Naomi Rukavina – are strong and each play two or three roles.

I was particularly taken by the interplay between O’Neill and Rukavina in the run home because their characters’ relationship was allowed to develop to the point where we – the audience – really cared. I was also drawn to the Star Trek-like long “bibs” with uniform patches that the players wore in the opening act. The set and costume designer is Emily Collett. With dramaturgy by Tom Healey, dare I suggest that director Julian Meyrick is well in control of his surrounds at Red Stitch Theatre. The piece is playing there until 3rd November, 2019. If science fiction is your bent, you should definitely see it.