What a magnificent feel good show. Come From Away restores your faith in humanity. Moving, energetic and melodic, I defy anyone not to be in raptures … because it really is that good.

The story is set in Newfoundland, an island off the northeast coast of Canada, after the September 11, 2001 terrorist attacks. For the first time, American airspace was shut down and 38 commercial aircraft carrying 6,579 passengers from 92 countries were diverted to the sleepy hollow of Gander, population 9,651 (and four traffic lights). Ill-equipped to handle the deluge, the citizens of Newfoundland rallied and found a way through. 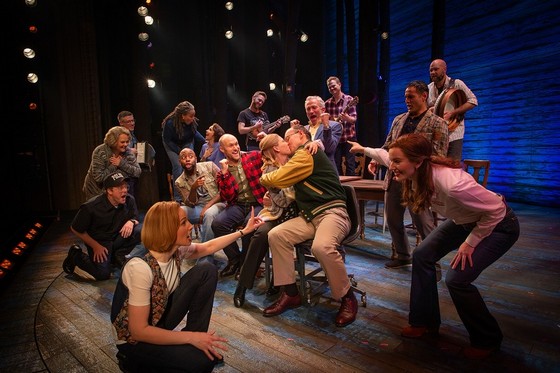 When they landed, those on board the planes had no idea what had just happened. When they found out, like the rest of the world, they were deeply shocked and just wanted to get home … but they couldn’t for five long days. In the meantime, the townsfolk went way beyond the call of duty to lend a helping hand. By doing so, they entrenched Newfoundland in the psyche of all who inadvertently found their way there. Sure there was tension, distrust and heartbreak, but there was also overwhelming goodwill from the locals, which won out.

In the story, love is lost and found and new life-long friendships forged … all in the space of the few days that changed those involved. The unusual title comes from the fact that Newfoundlanders refer to those not born on the island as “Come From Aways”.

To create the show, Canadian writers Irene Sankoff and David Hein (who are responsible for the music, lyrics and book) went straight to the source. They collected hundreds of hours of interviews from locals to distill into the show’s 100 minutes. Come From Away debuted on Broadway in February 2017. It went on to claim the Tony Award for Best Direction.

The 12 performers on stage for its Australian premiere in Melbourne sing and act up a storm, accompanied by eight equally special musos. Each of the cast members shares the limelight, assuming multiple characters. All are terrific. But Richard Piper as multiple mayors, Zoe Gertz as the first female captain of an American Airlines aircraft and Kolby Kindle as a bloke who evolves as a result of his experience, are foremost among them.

The simple set (by Beowulf Boritt) serves the storyline well. The 15 songs are rousing and poignant. As directed by Christopher Ashley and choreographed by Kelly Devine, Come From Away moves along at pace. It left me feeling buoyant. It has been quite brilliantly conceived and executed.

Come From Away is playing at the Comedy Theatre in Melbourne until 27 October 2019.