Early into Meyne Wyatt’s semi-autographical play City of Gold, feisty activist Carina (Shari Sebbens) speaks at a press conference following a protest in Kalgoorlie, condemning vigilantism and demanding justice. We need to wake up and listen in order to heal, she tells the unseen media and also the show’s audience. It’s a call to attention that is embedded throughout the world premiere work, which sells itself as a battle cry from the front line of Australian identity.

The execution of this core message is incredibly crafted in the show’s reference to politics and particular issues like the closure of Aboriginal communities, the abuse of Aboriginal youths in the corrections system and calls to change to date of Australia Day. Mention of Adam Goodes even makes an appearance in an Act Two opening monologue from Breythe (Writer Meyne Wyatt) in question of his place as an Indigenous Australian in the entertainment industry and share of the reality of lived experience for Indigenous Australians. 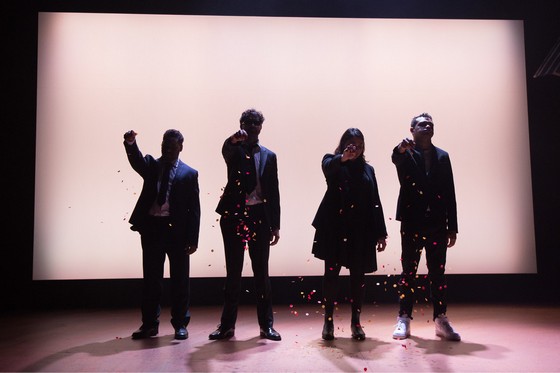 Young actor Breythe left Kalgoorlie with a determination to make it big. Though he has made occasional appearance on Home and Away, he’s found himself starring in a controversial Australia Day advertisement. Returning home to Kalgoorlie with new shoes and craft beer preferences, he finds himself alienated from his country, community and siblings Carina and especially brother Mateo (Mathew Cooper). Both individually and together we see the trio struggle in the immediate aftermath of their father’s (Maitland Schnaars) death.

‘I didn’t expect it to be so funny,’ a shared audience whisper exclaimed after the show’s initial scene, during which Breythe is on set filming the troublesome Australia Day advertisement. The show’s humour is not only unexpected but very effective in creating a shared experience through laughter that continues throughout the production. The story’s vernacular is such that listening to its dialogue often feels like eavesdropping on an intimate conversation as family members open up their world to the audience. The sibling banter is absolutely authentic, including conversational arguments seemingly over nothing. This not only facilitates a lot of the show’s wry humour but makes its wallop of an ending even more stunning.

While some opening night lines are lost in the rough and tumble of dialogue delivery, this will surely settle as the show’s run continues. The main performers are equally excellent in their characterisation. Wyatt is compelling as the charismatic, conflicted protagonist Breythe, while Cooper gives a powerhouse performance as his angry brother Mateo, showing us the shocking extent to which all that glistens is not, in their city of gold. Sebbens brings conviction to the role of Carina and Jeremy Ambrum gives us many of the show’s funniest moments through his perfectly pitched often throw-away line delivery.

City of Gold is very good theatre in its speak to race relations in this country right now, in way that isn’t preachy or teachy. This is helped by Tony Brumpton and Jason Glenwright’s sound and lighting, which work well together to unobtrusively create impressions in complement of the action on stage. Through its themes alone, the show is packed with provocation. Its heavy subject matter is made even more affecting by its basis in writer Wyatt’s own experience. Accordingly, there is a universal appeal to its deeply moving moments and emphasis of the importance of being together and making connection. Under Isaac Drandic’s direction, the idea of family resonates and there is a genuine honesty to the show’s attempt to articulate the experience of grief and regret of not being present for a parent’s passing.

City of Gold is not just urgent and important, but accessible theatre that serves to help make sense of a world that makes no sense at all. It is also very entertaining and thoroughly deserving of its opening night standing ovation and repeated curtain calls, meaning that it will surely shine bright as one the year’s Brisbane theatre highlights.

City of Gold is playing at Queensland Theatre until 20 July 2019.