A flawed but sometimes amusing animated feature, Charming is a delightful twist on damsels-in-distress. 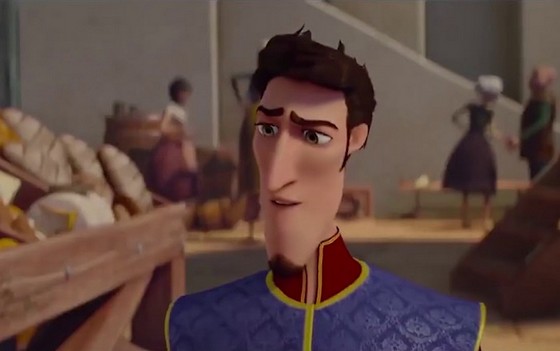 As an infant, Prince Philippe Charming (the voice of Wilmer Valderrama) was maliciously “over-blessed” with “charm” as the result of a curse. So, through no fault of his own, he attracts women like a magnet. Every woman he meets falls madly in love with him. To this point, the world’s most famous prince has coasted through life. But now he has racked up three very high-profile fiancés – none of whom he loves –and hundreds of spurned lovers out for his blood.

The only way for the prince to break the curse is to find true love before his 21st birthday, which is only days away. So, his father, the King (Jim Cummings), sends him on a journey of self-discovery and manhood. It’s a journey the King himself undertook and his father before him. Guiding Charming is a roguish stranger named Lenny  – actually a female thief named Lenore Quinonez, dressed as a male (Demi Lovato). Being born at sea, Lenore is also no “maiden of the land” and therefore the only woman in the world immune to Charming’s magical allure.

Written and directed by Ross Venokur, the idea for the movie came about from reading bedtime stories to his daughters. Those stories involved big name princesses, so it was only a matter of time before Venokur realised that one after another were married to Prince Charming. So, the questions became: how does this guy keep pulling this off and who was his real match in fairytale land?

I really appreciated the storyline that underpinned the movie. So too painting Snow White (Avril Lavigne), Cinderella (Ashley Tisdale) and Sleeping Beauty (G.E.M.) as shallow and egotistical. Some of the dialogue worked better than others.

Attracting an audience with catchy pop songs is one thing, but honestly this tale could have been told without music. And oddly the syncing between cartoon characters and the songs simply didn’t work at all. On the plus side, John Cleese voicing the executioner was comic genius.

So, to sum up, Charming is uneven; a film with flashes of brilliance and just as many missteps.