This colourful but corny reboot of the iconic Charlie’s Angels TV series has been kicked up a gear for a contemporary audience. It retains the basics of the original, but has a whole lot more attitude. 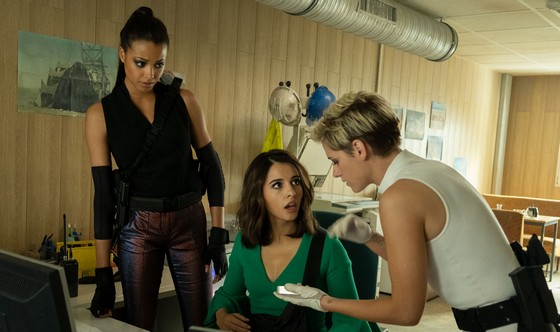 Charlie’s Angels was a huge hit when it first aired on TV in 1976. It lasted five seasons and 110 episodes. Then, two decades later (in 2000 and 2003), two feature films continued the original  story.  Now three newbies – Kristen Stewart, Naomi Scott and Ella Balinska – take on the roles of private investigators for the fictitious Charles Townsend Agency.

Writer and director Elizabeth Banks takes the helm as the next generation of Angels take flight. The Townsend Agency has expanded internationally. With the world’s smartest, bravest and most highly trained women all over the globe, there are now teams of Angels guided by multiple Bosleys – a senior rank within the agency – including one played by Banks.

Elena Houghlin (Naomi Scott), a brilliant scientist and engineer, has created a sustainable energy source known as Calisto. It’s been designed to revolutionise the way we power things. When her boss tries to rush her invention to market, she warns him there is a potentially deadly flaw in the system. In the wrong hands Houghlin’s remarkable invention could be used as a deadly weapon. Unfortunately, that’s just how things turn out. This is a contemporary whistle-blower story, in which the whistle-blower becomes a trainee Angel.

I thought Stewart was the best of the Angels. Her tongue-in-cheek delivery lifts arguably the best lines in the script. In a significant departure from his role as Professor Charles Xavier in the X-Men series, Patrick Stewart is cast as the original John Bosley. He represents the old-school iteration of the role.

Banks, as writer, has made sure to add a series of twists so, basically, you’re not sure who’s good and who’s bad. The sets, setting and locales are exotic, in keeping with the original TV show.

Charlie’s Angels was never going to be highbrow entertainment. It’s repackaged silliness and playfulness in the guise of an actioner. Its lightweight fare certainly won’t win any prizes, but gives Milennials something vacuous to smile about.

The final credits  even include a homage – however fleeting – to the Angels who preceded the current crop.