Lightning McQueen (Owen Wilson) is not a rookie anymore. Blindsided by a new generation of blazing-fast racers and one in particular – the cocky and arrogant Jackson Storm (Armie Hammer) – the legendary Piston-Cup champion finds himself suddenly pushed out of the sport he loves. 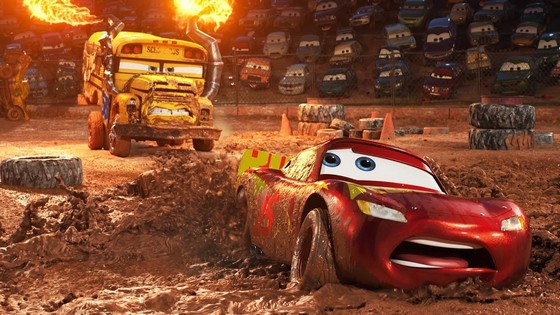 While Lightning is still the same self-assured car audiences fell in love with, his confidence is being tested by the new cars on the track. Enter eager young race technician Cruz Ramirez (Cristela Alonzo). Tasked with getting Lightning back on track after a major setback, Cruz isn’t shy. Her training style is high-tech, enthusiastic and steadfast. She’s not afraid to apply a little tough love, but there’s more to Cruz than meets the eye.

Cars 3 pays homage to NASCAR with four characters based on real-life stock car racing legends. Its predecessors, released in 2006 and 2011, did well at the box office (combining for a worldwide take of more than a billion US dollars), so a second sequel was all but inevitable. The original also won the Golden Globe award for best animated feature.

Again, a strong feel-good factor is at play here. We have heart-warming characters, a bold colour palette, the new guard really testing the stalwarts on the track and life lessons to take away. I enjoyed it a whole lot more than I expected to.

I entered the cinema questioning whether there would be enough to warrant continuing the franchise. Well, the answer is a resounding “yes”. The characters’ personalities are well drawn and executed. Their instincts are positively human. The production values are solid and Disney’s direction sound. The studio sure knows how to put on a good show.

Importantly, the storyline wasn’t simply more of the same. Rather, the narrative moved along by signaling the start of a new phase of life for Lightning McQueen.

Cars 3 blends action with low level drama to ensure it stays family-friendly. And even if you haven’t seen the first two instalments, it is easy to appreciate as a standalone picture.  Rated G, Cars 3 scores a 7½ out of 10.