The animated Captain Underpants: The First Epic Movie is the first feature film based on the popular series of children’s’ books. Written and illustrated by Dav Pilkey, the series has sold over 70 million copies worldwide. 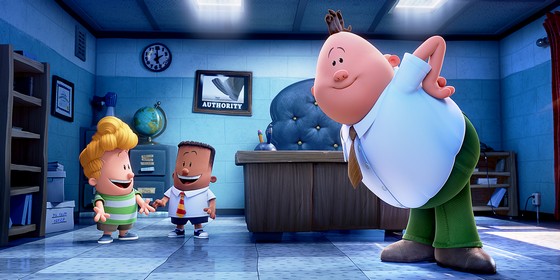 It centres around George Beard (voiced by Kevin Hart) and Harold Hutchins (Thomas Middleditch). They’re best friends and overly imaginative pranksters at Jerome Horwitz Elementary School. They spend most of their time in their tree house drawing comic books featuring their creation, the overly enthusiastic but dim-witted crime fighter Captain Underpants. Their hero wears a pair of tighty-whiteys and a red cape. Why? Because all great superheroes wear their underpants on the outside.

The boys’ pranks are the bane of the school’s principal, the mean-spirited Krupp (Ed Helms, from The Hangover trilogy). Krupp has finally gathered enough evidence of their involvement in the pranks. He plans to use it to separate the boys into different classes and possibly end their friendship. But George uses a toy 3D hypno-ring (found in a box of cereal) to hypnotise Krupp. George orders him to assume the identity of Captain Underpants.

All good superheroes need a good supervillain. Here that villain is the new science teacher Professor P (Nick Kroll, from Sausage Party). Driven by revenge, P wants to remove all laughter and humour from the world. Relentless teasing about his funny surname spurs his vengeance. With the help of his latest gadget (that looks like an outsized toilet) he is ready to experiment on the students at Jerome Horwitz to perfect his device. He wires his device to the brain of school nerd Melvin Sneedly (Jordan Peele). Can George, Harold and the eponymous superhero save the day?

No real surprises here, but there is a lot of fun to be had along the way with this imaginative, colourful and lively animated tale. Captain Underpants is pretty silly stuff, but it will entertain younger audiences without condescending to them.

Director Daniel Storer (Turbo) keeps things moving along at a quick pace, and the film’s brief 89 minutes fly by. The animation itself is great and highly stylised, bringing Pilkey’s characters to life. Storer has assembled a strong vocal cast, many of whom have plenty of experience with animated films. Hart is normally one of the more irritating actors around, but here he seems a good fit for the character of George. Helms is perfect in the dual role of Krupp and the inane Captain Underpants, managing to give each character their own distinct personality.

Captain Underpants has been written by Nicholas Stoller. Stoller is better known for his adult scripts for films like Forgetting Sarah Marshall. But he showed with last year’s Storks, he can temper his raunchy instincts with juvenile humour. And he crams plenty of juvenile stuff into Captain Underpants. There’s a strong streak of off-the-wall subversive humour running through the film, but there’s also plenty of toilet humour.

Of the three animated kids’ films around these school holidays, Captain Underpants is superior and a good option for families.