I went into Can You Ever Forgive Me? with almost no expectations, except those that came with knowing Melissa McCarthy was in it. But the serious-looking poster they were projecting before it began had me surprised and curious. 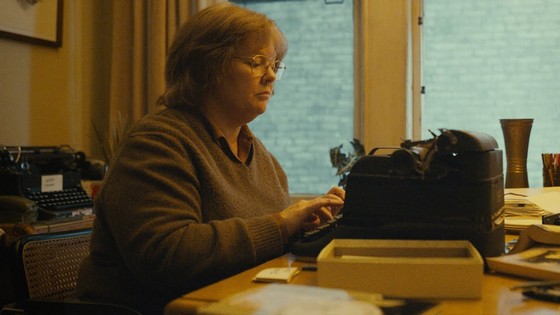 The film centres on Lee Israel (McCarthy) – a fifty-one-year-old writer and nihilistic cat lady. She tries to make a living writing first-person biographies about famous figures from the 1940s. Down on her luck, she stumbles across a letter folded between the pages of a library book as she’s doing research for her new work. After selling the letter for a high price she – along with her hyper-gay drinking buddy, Jack Hok (Richard E. Grant) – realises the potential letter forgery has in making the money she needs to get her life back together.

Don’t let the promotional material fool you: this film is a comedy more than anything. That shouldn’t be surprising, nor is it to the movie’s detriment. The characters are all snide and a lot of the comedy comes from them butting heads and taking swipes at each other with foul-mouthed joy.

Marielle Heller, a virtual unknown, proves herself capable of directing something entertaining with widespread appeal. Coupled with Rogan and Franco’s go-to cinematographer, Brandon Trost, the film has the air of a comedy but with a stone-faced facade. The colours are moody and muted and the cinematography is obtuse but this is used to keep the weight of the drama intact and allows the comedy to come purely from the dialogue and performances.

The drama of the film is present enough to give the story the motivation it needs to keep the audience engaged but without detracting from McCarthy’s dryly comedic jabs and Richard E. Grant’s flamboyant comedic steamroller of a performance. Almost every scene Grant is in is bound to get big laughs. I would say the film takes itself a little bit too seriously, but seeing as it’s based on a true story, it’s understandable why it might seem that way. The truth of the drama is an unavoidable fact.

If you’re looking for something light and entertaining with a few laughs and a potty mouth, seek this one out.