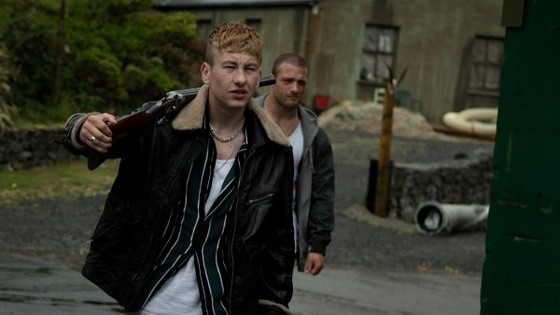 Douglas “Arm” Armstrong (Cosmo Jarvis) is a former boxer who fell in with a ruthless family. The family’s two no-nonsense brothers, Paudi (Ned Dennehy) and Hector Devers (David Wilmot), rule with an iron fist; and Arm has become their enforcer. Arm takes riding instructions from the brothers’ nephew, Dympna (Barry Keoghan). Arm has an autistic son, Jack (Kiljan Tyr Moroney) with Ursula Dory (Niamh Algar). Jack doesn’t speak and is prone to bouts of uncontrolled screaming. Being with horses calms him, hence the film’s title.

Arm spends most of his time with his “adopted” family, but values the opportunity to drop in on his son and his former partner, infrequent though that may be. He wants the best for them, even though his life is ruled by violence. Things are about to get a whole lot uglier though when Arm is tasked with killing a former member of the family’s inner sanctum who wronged a teenage member of the clan. With that, Arm’s fate is sealed.

I can’t speak highly enough of Cosmo Jarvis’ (Lady Macbeth) turn as Arm. Jarvis packs punch in more ways than one.  You dare not look away for a second as he plays a man torn asunder by two sides of his character. Around him are other principals who are also compelling. Niamh Algar, too, is robust but vulnerable as Jack’s mother.

In crafting the script from a short story by Colin Barrett, Joseph Murtagh has taken the opportunity to add several layers and the movie benefits greatly as a result. He crafts a nuanced work given ample time to breathe by the craftsmanship of Nick Rowland, who has well and truly announced himself to the world as a figure to watch.

From the opening scene a fog of menace hangs over the film, due in no small part to an arresting score by Benjamin John Power. The evocative – often desolate – cinematography by Piers McGrail in the west of Ireland is another feature.

Calm with Horses is a masterful work, which promises to stay with you long after you exit the cinema.