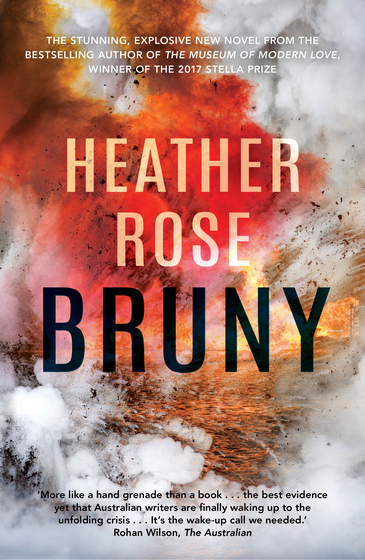 A comment often made about Bruny is that readers going in did not know it was going to be such a political read.  Bruny is one of those works that very effectively puts the frighteners on for many fronts; climate change, politics, foreign investment, cultural divides – swing the proverbial, you’ll find it here.

The building of a bridge between mainland Tasmania and Bruny Island is a contentious issue with many island residents not seeing the point of making a part of the world that should be protected that so much more accessible. Called back home by the twin powers that rule her world – family and politics – Astrid Coleman needs to serve two masters with her latest assignment. The Coleman family is nothing if not forward thinking, and having a brother as the Premier and a sister as the Opposition Leader has long been one of the reasons that Astrid seldom goes back to Tasmania.

A bombing on the incomplete bridge project needs some careful handling, and Premier John Coleman (JC) is conscious of the need to circle the wagons, keeping information to the close few that he trusts. Astrid is not convinced that the story being peddled to the public is truthful and quietly determines to carve out her own path to the truth.

It’s a testament to the skill of the author Heather Rose that so much is included in a novel set in a part of the world that few outside of Australia would be aware actually exists.  Which would seem to be exactly how the Tasmanians would prefer Bruny Island to be  – left to its own devices and not on anyone’s radar. Bruny presents us with just a small step to the left of what the geopolitical landscape could become with just a few changes in government, a few less sensible minds in power.  Are we there already?  Possibly. Located off the south eastern side of mainland Tasmania, Bruny Island is perhaps not the first place your mind would immediately go to if you were thinking of likely hot spots for terrorist activities.  This could change after reading Bruny.

Bruny is a little hard to classify because of how issue drenched it is – a little romance, lots of intrigue, family dramas and evolving personal relationships are all thrown into the mix.  This is not to say that the novel is haphazardly constructed as Bruny definitely has an evolution in how the lead character realizes what is most important as she information gathers.  Bruny leads us into thinking that all the crappy things happening in the world right now could just as easily result in us all experiencing a whole host of similar catastrophes. This may come to be in part due to our collective inattention to insidious change, and our complacency in addressing those changes that are happening incrementally right in front of us.

Bruny is the perfect novel for intelligent value discussions about what Australians do or should hold dear, but let’s be honest, it is triggering to read of all our fears playing out on home soil.  If you are one of those people who curates their Twitter feed like Edward Scissorhands away from anything to do with climate change or the antics of the multiple buffoons currently running powerful countries, reading Bruny will likely ping off all your self-preservative alarms.  It may also provoke you into questioning what your own values might be, should you ever be in a similar place to the Tasmanians we encounter in this thought provoking work of fiction.  The people of Bruny have a lot more to lose than just their faith in their democratically elected leaders.   Bruny is a tense work of fiction that will slap its readers in the face as to how close and possible it feels, in our current cultural and political landscape.

Bruny is published by Allen and Unwin.  Author Heather Rose has written eight novels and was awarded the 2017 Stella Prize for her novel The Museum of Modern Love in 2017.