At the risk of offending true believers, this is a church movie. It pivots around forgiveness. To the best of my knowledge, it was largely, if not entirely, funded from church resources.

I dare say its key audience will be those of the faith, and ex-pat New Zealanders (it was made there, and is set there). The scenery is breathtaking and the sweeping drone cinematography (predominantly shot on NZ’s east coast) is awe-inspiring. Josh Campbell is responsible. 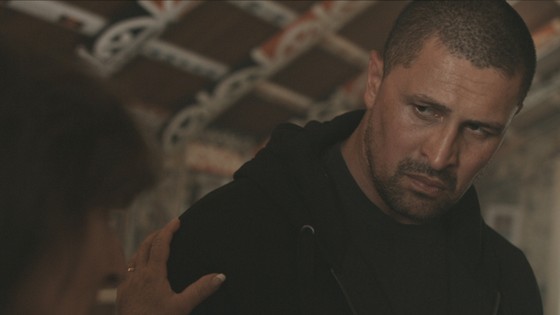 Broken is a modern retelling of a 19th century story, which became a children’s book written by Joy Cowley. Titled Tarore and her Book, it’s the tale of a bright young Māori girl named Tārore. She who was given a copy of one of the first books published in New Zealand, a translation of the Gospel of Luke into the Māori language. She treasured the Gospel but unfortunately was murdered the next year by a marauding tribe. That, though, wasn’t the end of her story.

Broken focuses on a respectful teen called Tori (Ruby Grubb) and her single father, Logan (Josh Calles). Logan is a former gang leader who chose to walk away from “the Mad Bulls” to raise his daughter. They both love to surf and four months earlier Tori chose to join the youth church, which she loves. She cherishes a jade cross, which she wears to honour her dead mother. Try as she might, Tori can’t convince her father to set foot in the church.

One day Logan is visited by a member of the Mad Bulls, Murphy (Jol Sparks). He’s intent on roping Logan back in due to what he claims are new circumstances. Murphy tells Logan that their gang’s chief rival, Pouakai, is planning on eliminating the present and past leadership of the Mad Bulls because of incriminating evidence the Bulls have on Pouakai. Although at first Logan resists Murphy’s advances, circumstances quickly change. Before long Logan and Murphy must confront their notorious enemies. Foremost among them is Cruz (Wayne Hapi) and his chief attack dog, Axe (Loupua Lavulo).

First-time film maker and pastor Tarry Mortlock wrote and directed the film. The story is obvious, the approach taken is heavy-handed, and the acting is wooden. While the lines are delivered, I often felt there wasn’t anything more than platitudes behind them. Credibility was lacking.

At its core is how to break the cycle of revenge. As powerful a message as it carries, the film lacks any sense of subtlety. It felt like I was constantly being hit over the head. I have no doubt that forgiveness transcending revenge could find compelling cinematic form, just not here.

There will be a small audience for Broken in Australia – and I recognise I risk incurring their wrath. That audience consists of those who will regard the content as an affirmation of their faith and are prepared to overlook or forgive decidedly amateurish filmmaking.