A truly wonderful and memorable musical set in America’s south over a quarter of a century (we are dealing with two time frames – the 1920s and ‘40s), Pursued by Bear has pulled out all stops to make it a winner. Inspired by truth, Bright Star follows twin story arcs in North Carolina.

Handsome, shy, writer-to-be Billy Cane (Callum O’Malley) has just returned from World War II to the news that while he was away his beloved mother died. His father (Tom Blair) is mighty proud of him and the pretty young woman, Margo Crawford (Sarah Krndija), at the local library – who is soon to turn 21 – is waiting for him to ask her out. She has always had a soft spot for him and for his prose.

Billy decides to try his hand at submitting some of his stories to the regional newspaper and goes there in person. There he meets the stern, intelligent, studious literary editor, Alice Murphy (Kala Gare), who has a keen eye for not only good writing but for those trying to pull the wool over her eyes.

Murphy used to be a whole lot more fun than she is today. Back in the day she had her sights set on the good-natured Jimmy Ray Dobbs (Matthew Prime) and he her, but his businessman father – the local Mayor (Mike Gardiner) – had other ideas. The latter wanted his son to marry into money and while Dobbs had his heart set on university, his dad wanted him to learn the family business on the job, just like he had done. Tragedy ripped apart Murphy and Dobbs.

What unfolds before us is comic, dramatic and creative. I was so taken by the magnificent, rich, rounded and pure voices in Bright Star. The female leads are sensational, not just because of their golden pipes, but due to their brilliant comic timing and delivery. Kala Gare has a particularly difficult role because she has to straddle light and darkness. She does so impeccably.

You can’t help but like Callum O’Malley as the respectful and naïve Billy Cane, while there is a surety about big voiced Matthew Prime as Jimmy Ray Dobbs. Mike Gardiner inhabits the persona of puppet master Mayor Dobbs, whose choices inform the piece, while Tom Blair is empathetic and caring as Daddy Cane.

The relationships in Bright Star are particularly well drawn, not just between the primary players to which I have already referred, but the secondary performers too. Lachlan Hewson, who plays Daryl Ames and Ellie Nunan (Lucy Grant) have a cheeky, cheery, easy-going and palpable connection as Murphy’s fun-loving offsiders. Anthony Craig, as the nerdish Max – who has long held a torch for Margo – is a deft hand at delivering some memorable and highly amusing lines.

The musical features a talented cast of 18 and 10 splendid musicians (two of whom double as cast members). With book and story by Steve Martin and music, lyrics and story by Edie Brickell, Bright Star is a heartfelt and masterful work, with a surfeit of ear pleasing tunes (we are talking ripping country and bluegrass numbers).

It opened on Broadway in 2016 and it is not hard to see why the show was nominated for five Tony Awards, including Best Musical, Best Book of a Musical and Best Original Score. The original Broadway cast album was nominated for a Grammy. 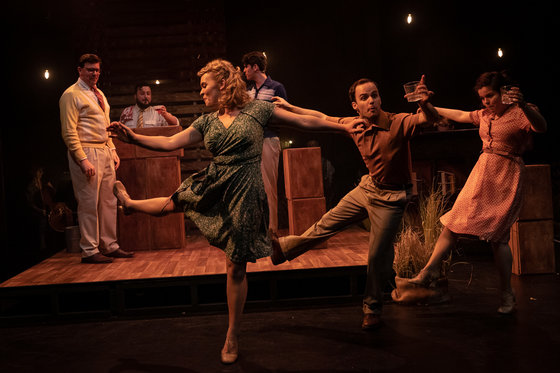 In Pursued by Bear’s production, director Mark Taylor and musical director Nathan Firmin have done a fine job with the material, while choreographer Freya List has a touch of genius about her with the choreography. I was particularly taken by the simple but effective set design – tufts of grass, flowers, small bundles of books and a couple of large floor-to-ceiling slatted backdrops with the prodigious use of small wooden crates – by Sarah Tulloch.

Opening night was a triumph in all respects other than the sound quality. In short there were microphone problems, but I am confident these will be fixed for the rest of the run. Two and a half hours, including a 20 minute interval, Bright Star is a rolled gold winner – a must see, which I would gladly sit through a second time – playing at Chapel off Chapel until 3rd November, 2019.