Breath is a haunting and elegiac coming-of-age tale. Set on the wind-swept coast of Western Australia in the 70s, it centres on two 14-year old surf rats.

Bruce Pike – aka Pikelet – (Samuel Coulter) and Ivan Loon – aka Loonie – (Ben Spence) are best friends. Pike is a good boy from a respectable family. He’s quiet, and a good student. By contrast Loon comes from a broken home and lives with his abusive alcoholic father (Jacek Koman). Loon is more self-destructive and has a thirst for adventure and taking risks. 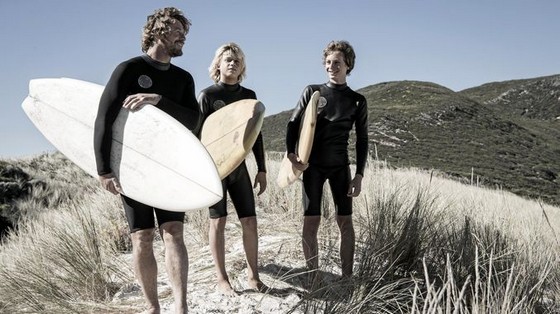 While out surfing one morning, they encounter Sando (Simon Baker), a veteran surfer who now leads a quiet life in his ramshackle house. Sensing a shared love for the surf in the two boys Sando takes them under his wing. They learn he was a champion surfer, but retired from the sport. The boys begin to hang around Sando’s house in their spare time and he becomes something of a surrogate father figure for them. He delivers little life lessons to the two boys, as well as suffusing them with the mythological purity of the ocean itself.

This is a thematically rich and gorgeous looking adaptation of Tim Winton’s acclaimed 2008 novel of the same name. It contains elements and themes that have been a constant Winton’s his works like Lockie Leonard and The Turning. The film marks an assured feature film directorial debut for actor Baker, who has previously directed several episodes of his hit TV series The Mentalist (2008-15). His direction is assured and measured. He respects the source material and has an obvious empathy for the characters.

With its complex coming-of-age story, Breath explores more profound themes than most other surfing movies. It touches on issues of identity, family, sexual awakening and masculinity. Baker co-wrote the script with Winton. Breath is narrated by the older Pike (although the voice is provided by Winton himself, which suggests that there may well be an autobiographical element to the story). This adds a melancholy tone. However, this film adaptation isn’t quite as dark as the novel.

Baker brings his usual charm and easy-going style to his role as the enigmatic Sando, and he hints at something darker beneath the surface. Both Coulter and Spence were chosen for their surfing abilities, which lends an authenticity to those scenes, and Baker coaxes good performances from the newcomers. Their performances grow in confidence as the film moves along. Spence in particular has the looks that suit his part and he projects the image of the surf rat, much in the mould of another of Winton’s famous creations Lockie Leonard. Debicki delivers the more nuanced performance; as Eva’s coldness and aloofness slowly gives away to something else. The film however wastes the talents of Richard Roxburgh and Rachael Blake, who play Pikelet’s parents. They’re given little to do.

Breath mixes the nostalgic tropes of a rites-of-passage tale with the powerful beauty of nature. Veteran cinematographer Marden Dean strikingly captures the small-town setting and the harsh coastline. He captured some exquisite vision for the little-seen drama Fell. Stunning underwater cinematography by Rick Rifici complements the poetic images. The vast openness of the ocean itself is a wonderful contrast to the claustrophobic world inhabited by Pike and Loon and even Sando.