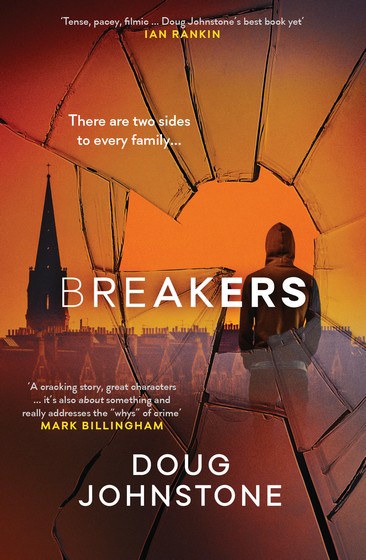 I think it was Billy Connolly, most likely during one of his numerous appearances on Parky, who I once heard use the phrase ‘shortbread tin view of Scotland’. In essence, the views of Scotland on shortbread tins were idealised and far from the reality of current day Scotland. Even today, if you find an image from Edinburgh on a shortbread tin it will most likely be one of Edinburgh Castle or the Tattoo within.

Greendykes House, a high rise council housing tower in the Edinburgh suburb of Niddrie and the main setting of Doug Johnstone’s tenth novel Breakers, would never be featured on a shortbread tin. Tyler Wallace lives in a flat on the top floor of Greendykes House along with his younger sister Bean and their drug and alcohol addicted mother. His older half brother and sister, Barry and Kelly, live in the flat next door.

“Tyler blinked long and slow, tried to get rid of the spots dancing across his eyes. He stared ahead at the Audi’s number plate, MH 100. A private plate on a top-of-the-range Audi, the posh house, the woman on the floor. A drawer full of iPhones and designer watches, a sawn-off shotgun under the bed. None of this was good.”

Barry, Kelly and a reluctant Tyler specialise in breaking into houses in Edinburgh’s wealthy suburbs. Usually the break ins go without a hitch but when Barry stabs the owner of a house when she disturbs them events spiral out of their control because the house belongs to Deke Holt, a major Edinburgh crime figure, and he’ll be hell bent on revenge. Tyler’s life soon becomes even more complicated when he meets Flick during a reckless solo daylight break in. They’re both drawn to each other but are also wary because they come from two sides of Edinburgh, rich and poor, which are never supposed to meet.

If there’s a word which best describes Breakers it would be trust. The first, simplest, and most important trust, in Breakersis that Bean knows Tyler will look after her. For Tyler however trust is a little more complicated. There are certainties he trusts; he knows Barry and their mother will never act in the best interests of Tyler or Bean, he knows Kelly will do what Barry says and Deke Holt’s revenge will be both violent and unforgiving. Then there’s Flick, although she represents the impossibility of a completely new life, he has no idea how to trust her. In the case of authority figures trust has two side because although he trusts Bean’s teacher to look after her when she’s in school he doesn’t the trust the motivations of the police.

Finally, he must trust himself to safely navigate the predicament they’re in because if he doesn’t, he’ll fail the trust that Bean has in him and that is the outcome Tyler dreads above all else. It’s a narrow path he has to thread, and Doug Johnstone expertly takes us through every tortuous step.