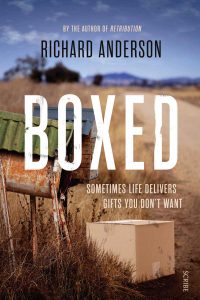 Bush crime, or rural noir if you prefer, is having quite the moment as we all know.  The challenges of such extreme geographic isolation in the hostile environment of outback Australia lends itself well to works of crime and dramatic fiction.  It’s possible there is going to be no one around to witness the occurrence of a terrible event. No one nearby to help, and perhaps no friends or family about either to observe what a person might be up to.  Enter the remote world of Boxed.

Dave Martin, newly separated, newly bereaved, but not so newly impoverished, is watching his life decline by degrees.  There are few routines left to cling to as the family farm decays around Dave and the community who once embraced Dave as part of a family of three are now not sure how to speak to him. There are no labels for parents who have lost their children; it being a suffering so deep that it has never been given a one word descriptive.

Hauling himself away from his largely liquid diet and out to his roadside mailbox is something Dave is still managing to muster up the energy for.  The constant arrival of boxes full of random items all bought online is an event to which Dave has now, likely unhealthily, become rather attached to.  The day Dave receives an empty box full of cash though is something of a gamechanger.  The box may have been addressed to Dave, but he is certain there isn’t a money fairy out there thinking of him and his dying farm.  Soon it seems everyone in the vicinity wants to see if there was a box delivered in error to Dave’s farm.  A decision needs to be soon made about how far Dave is prepared to go to mask the origin of his newly found wealth. New boxes are arriving all the time, not full of cash, but instead containing puzzling little clues to someone else’s life.

Australian author Richard Anderson knows his rural settings well, being a northern NSW cattle farmer himself. Dave Martin’s small rural community is easily identifiable to anyone who has ever lived or worked in such towns, with there being a sameness to the manner in which they are constructed, regardless of the landscape of bush or sea.  There is always the landed gentry, the newly landed, and fringe dwellers seeking a quieter life for fair reasons or foul.

Anderson shows respect and offers dignity to the smallest of rituals observed by the bereaved in an isolated location beautifully yet economically illustrated.  As Dave Martin’s life goes from meandering to murderous, we’re right there in the passenger seat with him, hurtling around dusty roads and living day to day with what might come next, be it in the form of yet another mysterious box or an unexpected visitor.  Dave’s life incrementally picks up the pace as he adapts to each new dilemma, moving beyond the ennui in which we find him wading through at the beginning of the novel, to thinking speedily on the run as he second guesses the motivations of everyone around him.

Boxed is a carefully and cleverly plotted crime novel centred around the deeper theme of what it is to endure paralysing loss.  This is not to say this is a novel saturated in melancholic regret by any means; Boxed has a self-deprecating character in Dave Martin and he is an interesting work in progress from start to finish of this absorbing book.  The setting is almost that of a post-apocalyptic community – everyone is waiting for something to happen, yet quite shocked when it actually does.

Boxed is Richard Anderson’s second novel. The first, Retribution, also deserves your immediate attention. Both novels are standalones and feature realistic characters that are desperate to move on beyond their current circumstances, yet are unsure of exactly how to do so.

Boxed is published by Scribe Publications.