Talk about disgraceful conduct and an attitude of entitlement when it comes to being a man calling the shots among women trying to make a name for themselves and get ahead in their careers.  That is the story of Fox News chief Roger Ailes (John Lithgow), as told in some gory detail in Bombshell. 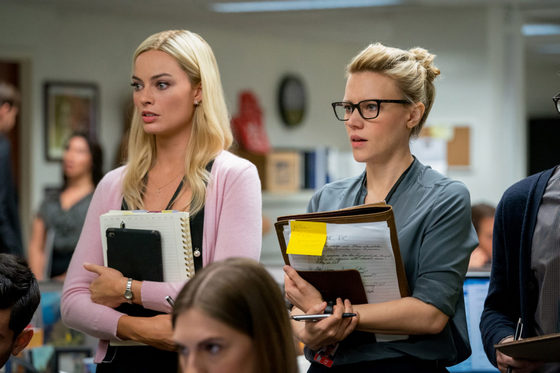 The fuse was lit in the summer of 2016 by Gretchen Carlson (Nicole Kidman), once the unswervingly perky co-host of influential “Fox & Friends.” When the recently fired Carlson slapped Ailes with a lawsuit alleging sexual harassment, most expected Carlson to get crushed.

After all, Ailes was the untouchable master of the media universe – ready to use his influence and resources to defeat any foe. Instead, what happened next reverberated around the world. In just 16 wild days, Ailes would take one of the most dizzying falls from elite heights in corporate history. For even he could not survive the force of multiple women – including superstar Fox News correspondent Megyn Kelly (Charlize Theron) – coming forward with their own stories.

Bombshell primarily unfolds through actors, with some archival footage included to aid the home truths.

In a powerhouse performance worthy of an Oscar, Theron is virtually unrecognisable as highly regarded, call it as it is anchor Kelly.

As another anchor sidelined to the afternoon graveyard slot by Ailes after she rebuts his advances, Kidman as Carlson deliberately presents a slightly awkward characterisation.

In another look at me, dare not turn away showing, Margot Robbie – who does sweet smile and fluttering eyelids better than anyone – is the up and comer Kayla Pospisil who is quickly in way over her head.

And then there’s a portly Lithgow, full of bombast and indignation, as Ailes, a man who built a highly profitable news network on a “my way or the highway” approach.

With much less to do and significantly less impressive are Malcolm McDowell and Ben and Josh Lawson as Rupert Murdoch and his two sons, Lachlan and James, who are left to clean up the mess.

With a script by Charles Randolph and direction from Jay Roach, Bombshell is intense and dramatic from go to whoa. It vividly presents the ugly, competitive world of television and naked ambition (no pun intended).  More to the point though, Bombshell is about sexual exploitation.

Many times my levels of anger were at boiling point as Ailes and political commentator Bill O’Reilly (who doesn’t feature prominently) were allowed to get away with appalling conduct for far, far too long. And then, even upon dismissal, they profited largely.

In closing, let me just add that US President Donald Trump hardly comes out of this covered in glory either.