While the recent Yesterday concentrated on the music of The Beatles; Blinded by the Light, focuses on a young man heavily influenced by The Boss, Bruce Springsteen. This one is inspired by fact, which isn’t the case with the other. 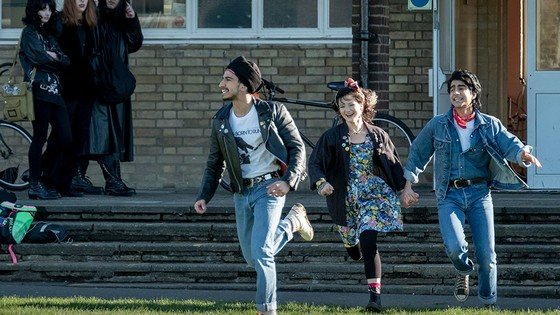 Set in 1987, during the austere days of Margaret Thatcher’s Britain, Blinded by the Light is about a teenager who learns to live life, understand his family and find his own voice through the words and music of Springsteen. Javed is a 16-year-old British Pakistani boy growing up in the boring, industrial city of Luton. He feels trapped and all he dreams of is escaping. He wants what all teenagers want – a girlfriend and the freedom to go to parties – but most of all he wants to be a writer. Unfortunately, his family has other ideas of how Pakistani boys should behave. They – especially his father – expect Javed to work hard to help the family and give his wages to his dad who runs the household.

Javed knows his only way to get out of town is to do well at school so he has the chance to go to university. On his first day at his new school, Javed bumps into a fellow student in the hallway and a cassette tape featuring one of the Boss’ albums falls out of the guy’s Walkman. He knows nothing about the singer but when he first hears Springsteen’s music everything in his life changes. Javed feels like Springsteen is speaking directly to him and understanding everything he thinks and feels.

Through a series of musical sequences, we see how Javed relates Springsteen’s words about feeling trapped in New Jersey to his own life in Luton. The lyrics are all about yearning to escape just like Javed wants to do and suddenly he has hope and possibility. Javed is inspired to find his own writing voice, to talk to the girl he’s always fancied and challenge his dad’s strict rule over the household. Inevitably though that newfound confidence causes a major rift between father and son.

The movie was developed from Gurinder Chadha and British journalist Sarfraz Manzoor’s shared passion for Bruce Springsteen. It’s based on Manzoor’s memoir Greetings from Bury Park, which chronicled his experiences as a British Muslim boy growing up in 1980s Luton and the impact Springsteen’s lyrics had on him.

Blinded by the Light is engaging, feel good entertainment, featuring a likeable lead in Viveik Kalra, who makes his feature film debut. The theme of standing up to racism and oppression looms large throughout as does the music and lyrics of Springsteen and his working-class roots. I appreciated Hayley Atwell’s portrayal of Javed’s encouraging teacher Ms Clay.

Blinded by the Light may well cause you to shed tears. I did, notwithstanding a few more jarring moments. These included rather clumsy handling of a number of key scenes that didn’t ring true for me. One involved Javed’s breakup with his girlfriend and another was his makeup with his long-standing best mate. Then there was what I saw as the far too quick about face from his father.

Still, in large measure I enjoyed the ride as, no doubt, will many others. Blinded by the Light is sentimental, syrupy and joyful.