Since premiering in 1995, Nick Enright’s Blackrock has found a place in both the Australian drama canon and on high school drama syllabuses nationwide. And, 20 years after its first presentation of the play, La Boite Theatre Company’s 2017 production shows just how sadly still relevant its social themes of mateship, misogyny and violence are. 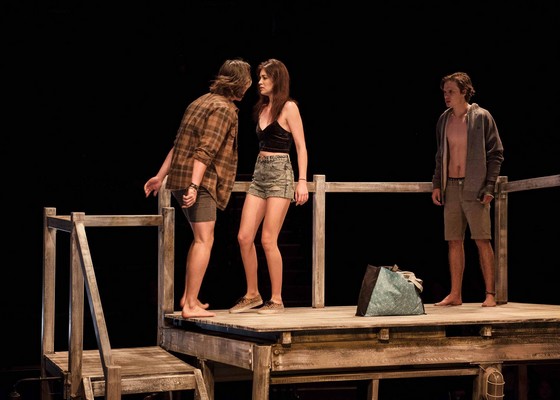 From the show’s opening scene, the production explodes with energy as teens in the (fictional) Australian beachside working-class suburb of Blackrock welcome home the prodigal, dangerous, local surfing legend Ricko (Karl Stuifzand). After an unsupervised beach party soon afterwards, 15-year-old Tracy Warner is found dead, raped by three boys, her head bashed in with a rock. Having seen the incident and done nothing, proverbial good bloke Jared (Ryan Hodson) is filled with guilt yet remains silent, which leads to the breakdown of his relationships with both his girlfriend Rachel (Jessica Potts) and his mother Diane (Christen O’Leary). Events are made even more shocking by knowledge of the narrative’s origins, based as it is on the real-life rape and murder of a 14-year-old Newcastle girl, Leigh Leigh which occurred during teenage birthday party celebrations at Stockton Surf Club in November 1989.

In a unique collaboration between La Boite and QUT Creative Industries, the play presents the impact of a violent crime on a close-knit community as an engrossing and moving experience thanks to powerful performances from a talented cast of established actors and QUT near-graduates alike. The script is action packed in its initial scenes as the talented cast brings Enright’s characters to vivid life, even if the deliberate colloquial language of g-dropping initially jars in its over-emphasis.

Powerful performances from across the large cast make for a moving experience of a story in which everyone is a victim, with the third year QUT actors allows for fresh audience responses. Thomas Cossettini gives a considered performance as Toby, torn in his determination of the difference between a friend and a mate. So too, as the victim’s friend Cherie, Ebony Nave shows compassion and emotion, especially in an initial, absorbing monologue. And Christen O’Leary and Amy Ingram show their experience as Toby’s fraught mother Diane and Cherie’s well-meaning, bordering on overbearing, mother Glenys.

Given its morally-ambiguous and thus compelling story, Blackrock is a demanding play to present and Director Todd Macdonald meets the challenge by giving the work plenty of pace. Transitions are swift and effective, and digital projections add much to the initial party atmosphere, however, while staging some scenes upon a raised wooden platform works well for those seated high in the theatre-in-the-round stalls, at other times it compromises vision and thus detracts from immersion in the play’s moments. 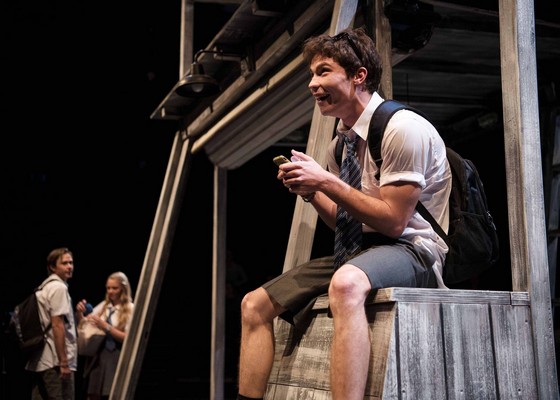 Sadly, twenty years after Blackrock was first published, its themes remain relevant, cementing its worth as a modern Australian classic, as shocking, emotional and confronting as ever and not in need to overt attempts to emphasise relevance with incorporation of deliberate Queensland references. In its exploration of the impact of the story’s brutal crime on a small community and, in particular, on the only witness as he wrestles with his conscience and the laws of loyalty considered sacred among male teenagers, the show offers audiences a gripping theatrical experience but also much to talk about afterwards regarding youth culture, cyclical violence, peer pressure and the objectification of women.