Indigenous Australia’s fight for justice and equality is given superhero treatment in Blackie Blackie Brown. We may well be looking at the stage equivalent of the movies Deadpool or Kick-Ass.

Exaggerated theatrics are liberally supplemented by evocative graphics, animation, mock television news reports, and mood lighting. The staging is most effective. A series of joined vertical and horizontal squares hide a number of surprises. There are even bits of the popular ‘60s TV series Batman thrown in for good measure. 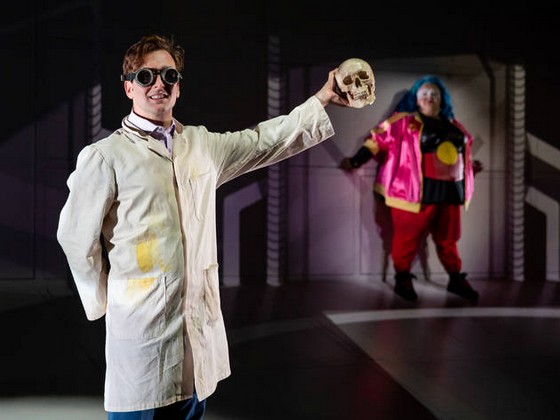 The premise is straightforward enough, although its execution is anything but. Dr Jacqueline Black is head archeologist for a ruthless corporation. The company is intent on literally bulldozing through its latest project in the Australian outback. Black’s boss, Mr Dennison, is a pompous ass who doesn’t want any “find” to interrupt the company’s nefarious plans. In fact, he has a hidden agenda, which is only revealed much later.

Dennison has no respect for Black’s heritage and coins the supposedly “fun little nickname” Blackie Blackie Brown. When Black uncovers a skull – part of a hidden mass grave – as far as she is concerned, all bets are off. But that’s not how Dennison reads the situation.

That’s when Jacqueline is visited by the ghost of her great-great-grandmother. The ghost tells her a terrible story about how her ancestors were treated shamefully by four white men a two hundred years ago. Great-great-grandma implores her to extract revenge on the 400 descendants of this quartet, claiming only that will set matters right. Reluctant to become a murderous vigilante, Black relents and before long she is being lauded by the black community and reviled by the white.

Blackie Blackie Brown proves that there is more than one way to explore the treatment of Indigenous Australians since European settlement. Humour has a way of breaking down barriers and its execution in the play resonated strongly with the audience on opening night. Laughter and applause were prevalent throughout, concluding with a standing ovation from many of those present. 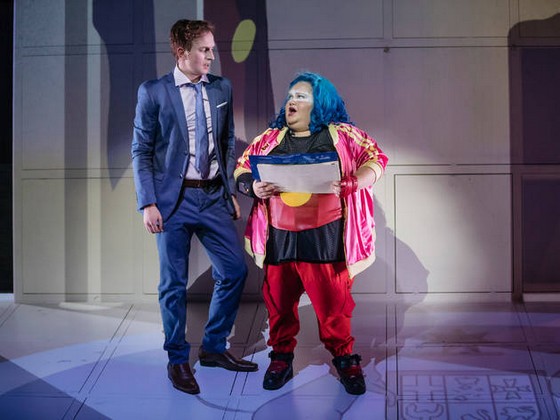 Ash Flanders, who fills multiple roles; and Dalara Williams, as Black, do a fine job with the material. They don’t hold back in bringing Nakkiah Lui’s lurid prose to life. Declan Greene provides the direction. Design is by Elizabeth Gadsby, while Emily Johnson was the concept artist, and video came from digital animation studio Oh Yeah Wow.

The buzz is real for Blackie Blackie Brown with good reason. It’s a night of theatre you are unlikely to forget in a hurry. It packs a punch in more ways than one and is playing at Beckett Theatre at Malthouse Theatre until 29 July 2018.